As it’s World Book Day, we asked the OU in Scotland’s Director, Susan Stewart, which five books she would choose as her very favourites.

This became a bit of a challenge for our resident bookworm. “Only five?”, was the immediate response.

However, she did manage to narrow it down in the end and here are her recommendations. If you enjoy them, why not tell us about yours?

“Like many, I first read this novel as a schoolgirl but it’s one I’ve returned to again and again in the intervening decades.

In the year that we celebrate the centenary of Muriel Spark’s birth, I think this novel is the best introduction to Spark and I get something different from it every time.

It’s perennially funny, the characterisation is superb – Miss Brodie’s ‘girls’, her ‘set’, are as interesting as Jean herself.

“Jackie is now Scotland’s Makar, but this was an autobiographical collection which first brought her to prominence and it blew me away when it came out in 1991.

It’s also the poetry book I’ve bought most often to give as a present.

These tender, moving, occasionally funny poems tell the story of a girl’s adoption by a couple from Glasgow and include the imagined voice of the birth mother. 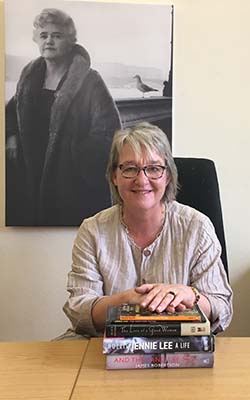 Jackie and I are of a similar age and have much in common and her poetry (and short stories and novels) would definitely be on my desert island list.”

“I’ve always enjoyed biographies of feisty women and they don’t come much feistier than Jennie Lee, midwife of The Open University.

First published in 1998, this is a compelling portrait of an extraordinary and determined woman operating in a male-dominated world.

A miner’s daughter from Fife, who could, Hollis suggests, be somewhat irascible.

This biography is testament to the old adage: ‘well-behaved women rarely make history’.

When drawing up my fantasy dinner party list, the redoubtable Ms Lee would be top of my list.”

The Love of a Good Woman – Alice Munro

“A Canadian of Scots descent (she is a descendant of James Hogg, the Ettrick Shepherd), Munro has won almost every literary prize going, from the Booker to the Nobel.

If recommending a short story collection to someone (because short stories seem an increasingly overlooked genre), I always start with Munro.

Many of her stories are set in her native Ontario, concerned with the domestic and the particular, especially family relationships and what happens when love goes wrong.

The title story in this collection of eight (she writes quite long short stories!) is one of my favourites and typical of her craft.”

“My partner gave me this novel for Christmas a few years ago and I didn’t emerge from the sofa until the 27th December, so engrossing did I find it.

Spanning the latter half of 20th century Scotland, familiar themes of nationalism, Thatcherism, class, rural versus urban, the sexual revolution and many other themes are examined through a large cast of socially and geographically diverse characters.

It richly deserves the many plaudits it has received but, most of all, for me it is simply a really, really good read.

A modern Scottish epic which I will return to often.”

Or you might find our Creative Writing course of interest at http://www.open.ac.uk/courses/modules/a215