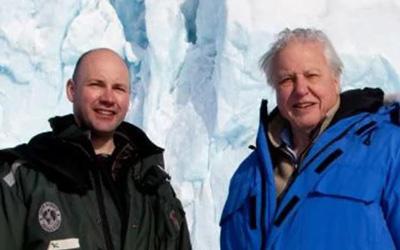 Mark will be speaking in Inverness on Monday 7 October; Perth on Tuesday 8 October; and Stirling on Wednesday 9 October.

In his talk, Mark will dive behind the scenes of Frozen Planet and Blue Planet II, and explore how science and discovery were the driving forces behind these multi-award-winning documentaries.

These series used breakthroughs in polar and marine science and cutting-edge technologies to bring viewers face to face with compelling stories of the natural world.

Mark will talk about the science of the polar regions and our oceans, the ins and outs of the television production process and the legacy of these shows in raising awareness about environmental protection.

“For my entire career, I’ve worked in the polar regions so I couldn’t miss the chance to work with the BBC.

“I’m delighted to be coming to talk about the latest research that goes into these series. And I’m honoured to be part of the RSGS Inspiring People programme, as it gives me the opportunity to reach different cities and committed audiences.”

Over the years, Mark has worked on the front line of climate change. As Professor of Polar Oceanography at The Open University, his research has investigated how the oceans are melting the great ice sheets, how the sea ice around our planet is changing, and the importance of the ocean in the marine ecosystem.

The Open University is supporting the Inspiring People talks.

“Teaching at the OU is underpinned by outstanding research in a huge range of fields. Our partnership with the BBC has produced ground-breaking programmes such as Blue Planet II and Frozen Planet and our space science research is world-leading.

“These talks are a fantastic opportunity to go behind the scenes of these programmes and find out more about some amazing discoveries.”

“In the Digital Age, the availability of high-quality film and television are increasingly important in inspiring people to care more deeply about the world around them and catalysing change – and the OU, BBC collaborations are fabulous examples of this.

"The legacies of series such as Frozen Planet and Blue Planet II are remarkable.”

More information on the three talks and links for booking tickets, are here.