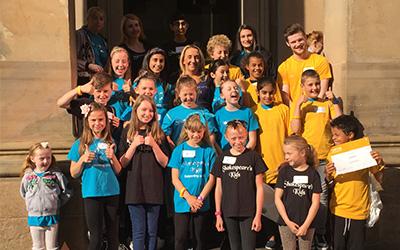 A graduate of The Open University (OU), inspired by her Shakespearean studies to set up classes for budding young Bards, is delighted they are performing as part of celebrations this weekend to mark the writer’s 400-year legacy.

‘Happy Birthday, Mr Shakespeare’ is dedicated to the life of playwright, actor and poet William Shakespeare and takes place this Sunday at Oran Mor in Glasgow. Organised by Scotland’s premier Shakespeare company, Bard in the Botanics, it will feature 20-plus stars of Shakespeare’s Kids and Little Shakespeares acting scenes from 'A Midsummer Night’s Dream'.

Directed by English Literature graduate and mum-of-two Sharon McNally, Cumbernauld-based Shakespeare’s Kids has enjoyed much success since being set up in 2012. It enables children aged eight upwards to create and perform versions of his most popular works to camera. With no auditions, there is a part with lines for every child who wants one; a previous film version of ‘Romeo and Juliet’ featured six Juliets.

Sharon (44) said: “My impression is that when you come to High School you already have the ingrained belief that Shakespeare is dull, boring, complicated and difficult.

"Children at the age of eight are more fascinated with stories and the whole intrigue of plots. Most of them are completely oblivious at that age to who Shakespeare is; it’s a whole fresh subject and they are beginning to read and get involved with literature. I’d say this is when you are really capturing their imagination.

Without The OU I would not have been in the position to create Shakespeare’s Kids so I am very grateful for the opportunities it has provided.

The former Citibank manager opted for a career change to enable her to spend more time with daughter Emily, who needed several operations for a rare bowel condition. Sharon studied for her BA (Hons) degree with The Open University while working as a childminder and her courses included Shakespeare: text and performance.

She said: “I’d always had a passion for literature and teaching. My specialty at Citibank was recruitment and training of staff across Scotland. I took this opportunity for a fresh chapter, to become a teacher. I did my English Literature degree with The OU and it was a fantastic experience.

“I could have done Shakespeare for the full three years. I was completely hooked. That was down to The OU; the materials and their whole approach just captured my imagination.”

Such has been the success of Shakespeare’s Kids and Little Shakespeares, including Big Lottery support, that Sharon opted against teacher training to be able to develop them.

“I was starting out to film one scene on an iPad and now we have done four films, a musical theatre production and are working with Bard in the Botanics, which I would never have imagined possible. That’s the equivalent of the Royal Shakespeare Company. It’s a huge step for the children.”

And the Bard’s legacy shows no sign of waning, with Sharon’s not-for-profit drama groups planning a festival for this September. Six classes currently cater for 120 children each week and Sharon is joined by a voice coach/musician, plus a stage and screen graduate who works with the children on their acting.

Sharon said." Without The OU I would not have been in the position to create Shakespeare’s Kids so I am very grateful for the opportunities it has provided.

Separately, BBC2 will screen 'Shakespeare Live! From the RSC' tonight (Saturday 23 April) at 8.30pm. A co-production by The Open University/BBC with the Royal Shakespeare Company (RSC), it is intended to mark Shakespeare’s birthday and the 400th anniversary of his death. Hosts David Tennant and Catherine Tate will be joined by a once-in-a-lifetime cast of actors, dancers, singers and musicians for the unique show at the Royal Shakespeare Theatre in Stratford-upon-Avon, before an invited audience including His Royal Highness The Prince of Wales, President of the RSC. As well as showing live on the BBC, the performance will also be screened live to 368 cinemas in the UK and Europe.

Finally, The Open University has lots of learning and other resources on Shakespeare and his work freely available on OpenLearn.