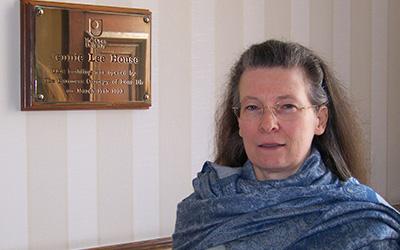 Dr Elaine Moohan, Senior Lecturer in Music, has received a grant from The Royal Society of Edinburgh (RSE) which will lead to the production of a modern performing edition of the 16th century music of Robert Johnson. These scores will be available to music scholars, amateur and professional singing ensembles, as well as schools.

An historical text [the St Andrews Psalter containing Thomas Wood’s marginal notes] claims Johnson, a priest from the Scottish Borders, fled to England after being accused of heresy. It is believed he lived until 1560 – the year of the Reformation in Scotland.

Johnson composed both sacred works, some in Latin and others in English, as well as secular pieces such as ‘Defyled is my name’, the text of which is said to be have been written by Anne Boleyn, the second wife of King Henry VIII of England.

Thirty-six of Johnson’s works are currently scattered around UK libraries in 62 manuscripts, including at the British Library in London, the University of Oxford’s Bodleian Library and The University of Edinburgh.

Dr Moohan (pictured) is visiting these to compile ‘The Collected Works of Robert Johnson’. She will transcribe and interpret Johnson’s musical notation for modern-day use, which includes collating music copied into separate vocal partbooks – such as the five-voice Easter Sunday piece ‘Dum transisset Sabbatum’ – into a modern score layout.

Johnson is an important composer for Scotland because there are so many of his works that exist; 36 that can be attributed to him, including 30 complete ones.

An arrangement of ‘Ave Dei Patris’ for the lute shows the popularity of what was originally a vocal work [and Johnson’s most circulated, appearing in 15 different sources].

The Reformation of 1560 resulted in Scotland officially breaking away from the Catholic Church, the Church of Scotland became the established church, and the language of church services moved from Latin to English.

Dr Moohan said, "Generally we have very few remaining pre-Reformation religious texts, including music, in Scotland. Johnson is an important composer for Scotland because there are so many of his works that exist; 36 that can be attributed to him, including 30 complete ones.

"That is quite a big output for a composer, and for them to survive is impressive, as so many books were destroyed at the Reformation.

“It is a great pity, but that is what happens in an upheaval. The first thing to go are the books, to clear the way for new ways of thinking and changes in ideology.

“I think the survival of a great number of Johnson’s works is due to the fact they were copied into books that were privately owned. A few were copied for English cathedrals, which have also made it through the Reformation and intervening centuries.”

Eighteen bars of the late Johnson’s music even feature in a Scottish book on music theory from 1580, emphasising how well-known he was then.

Dr Moohan said: “From the sources which still exist, Johnson could be counted among the best composers of the time.”

Being based at a University in Scotland, Dr Moohan was able to apply for the Arts and Humanities Small Research Grant from The RSE - supported by Scottish Government funding - enabling her to visit libraries in the south of England to research.

Once finished Dr Moohan’s works, both individual and as a complete volume of around 200 pages, will be published under the auspices of research network Musica Scotica, as part of their series of scholarly editions of Scottish music from all historical eras.

This is scheduled for next spring and Dr Moohan is keen for musical performances to take place around the launch.