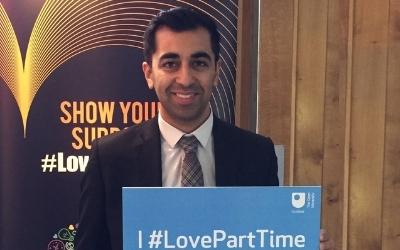 Tuesday 23 February saw The Open University take its #LovePartTime campaign to Holyrood to meet Members of the Scottish Parliament and raise awareness of the value of part-time higher education ahead of the Scottish Parliamentary election in May. With just under 15,000 students in Scotland, The OU accounts for over 40% of Scotland’s part-time undergraduate provision.

Part-time study widens access to higher education by making it more manageable for people facing additional barriers. In particular, part-time facilitates study for people in work, with families or other caring commitments, with a disability, living in a rural or remote area or on a low income.

Part-time study also has an immediate economic impact. More than 70% of OU students are in full- or part-time work, meaning that new skills and knowledge can be applied in the workplace straightaway. For every £1 invested in The OU, £7.50 is returned to the economy, with The OU in Scotland contributing more than £236 million to the Scottish economy.

We are grateful for the support received from all Members and we hope to see to all parties committing to supporting part-time higher education students in their forthcoming election manifestos.