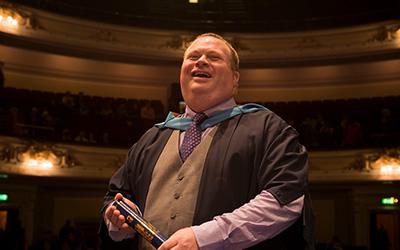 An Open University in Scotland graduate and Unite the Union Learning Representative has been announced as an award winner at a ceremony featuring First Minister Nicola Sturgeon at the Scottish Trades Union Congress (STUC).

Brian Ronald was an Engineering Inspector and the Lead Union Learning Rep at Rolls-Royce's Inchinnan plant. He is now Application Specialist / Project Manager, for the Aerospace Digital Visualisation Suite in South Ayrshire. In October 2016 he was the first to graduate with a Bachelor of Science (BSc) Open Degree from a unique learning partnership.

Brian was named recipient of the 12th Annual STUC Helen Dowie Award for Lifelong Learning at the STUC 2017 congress in Aviemore.

The award was sponsored by The OU in Scotland and administered by Scottish Union Learning.

30 learners registered on The OU pathway at Rolls-Royce. Brian was instrumental in setting up the partnership, organising the degree programme with Unite, Rolls-Royce, Scottish Union Learning and The OU.

A unique funding arrangement gave members at Rolls-Royce the opportunity to study for a degree at a time that suited them, at their own pace, with support from both their employer and trade union. Hear Brian and others talk about the programme.

As a Union Learning Rep, Brian also organised other courses for members in the workplace, in 17th Edition Wiring, AutoCAD and photography, with the support of the Learning Fund through Scottish Union Learning.

“Brian’s ability to lead by example in workplace learning whilst also achieving a degree and working full-time is remarkable. He is a credit to his union, Unite, and to Rolls-Royce and is a fitting recipient of this year’s STUC Helen Dowie Award for Lifelong Learning.”

“I am honoured to receive this year’s Helen Dowie Award, and would like to thank the STUC for selecting me for such a prestigious award. I think it’s great that the STUC formally recognises the work carried out by Union Learning Reps in this way. I would also like to thank my team of ULRs, Unite the Union and Rolls-Royce for their support in such a worthwhile project.”

We are pleased to be sponsoring this award which recognises the critical importance of lifelong learning and learning in the workplace.

Access to learning throughout our working lives has never been more important and The Open University greatly values its partnerships with unions and employers across Scotland.

“Brian is a dedicated ULR for Unite and is a very worthy recipient of this award. His hard work has seen many of his colleagues take up learning opportunities they never thought possible. He has played an instrumental role in the success of a unique degree programme in his workplace whilst studying to achieve his own degree. Unite congratulates Brian on winning this award and thanks him for his hard work and dedication over the years.”

Hear Brian and his colleagues, and Suzanne, talk about the partnership and the award: