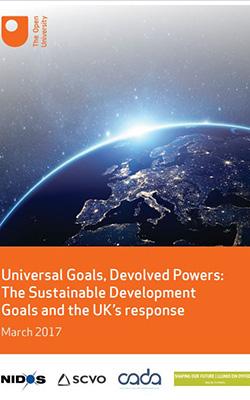 A new report is launched today (Monday 20 March) which examines the United Nations’ sustainable development goals and their implementation in the UK, especially within the context of the devolved governments of Scotland, Wales and Northern Ireland.

The report - Universal Goals, Devolved Powers: The Sustainable Development Goals and the UK’s Response – is based on findings from Open University-led workshops held in Edinburgh, Belfast and Cardiff.

Network of International Development Organisations in Scotland (NIDOS) and Scottish Council for Voluntary Organisations (SCVO) were partners for the Edinburgh event, held in October 2016, and the report.

The UN's sustainable development goals apply to every nation. With limited discussion about their application in the UK to date, The Open University (OU) workshop series was held to gain a clearer understanding of how and to what extent they are being implemented.

The events attracted around 200 participants from government, non-governmental organisations, the voluntary sector and higher education.

•    Public engagement will be crucial, both to effective implementation and to holding governments and key players to account.

•    If public engagement is to be successful, a more compelling narrative and new ways of illustrating what sustainable development might look like – moving away from images of wind turbines and ‘poor people’ – is needed.

A new global partnership for sustainable development is called for, that extends responsibility for delivery beyond national governments to stakeholders including civil society, the private sector, academia and local authorities.

For this to occur, a much greater emphasis on collaboration is needed. A fundamental shift in how governments and citizens work together needs to take place: from ‘doing to’ to ‘doing with’.

Find out more about the project, including hearing from Matt Foster, Director of The OU's International Development Office, by clicking on the video link below: