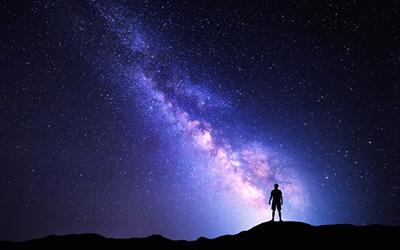 Ever gazed at the night sky and wondered what’s up there? With more stars in the Universe than there are grains of sand on all of the beaches in the world, astronomers at The Open University (OU) are searching for a troop of volunteers to help them identify millions of mysterious stars.

A team of astronomers from The OU and other academic institutions* are launching an international citizen science project to work out what over 30 million unique objects discovered in space actually are.

Lead academic and Professor of Astrophysics Education, Andrew Norton, explains what the Wide Angle Search for Planets – SuperWASP – Variable Star project is and why it is so important.

What is the project all about?
“We gathered over 16 million photographs of the entire night sky between 2004 and 2013. As you might imagine, that equates to lots of data; in fact, we have tens of thousands of measurements each of 31 million unique stars and we need a little extra support in identifying what types of stars these are."

Why does it matter what type of stars these are?
“Stars are the building blocks of the Universe and understanding them contributes to our understanding of how life began. Our Sun is a typical star and provides the heat and light for life to thrive on Earth.

“Variable stars, or those that when viewed from Earth appear to fluctuate in the amount of light that they produce, provide so much information about other stellar systems: how stars are born, evolve, and die; the size of the star and the exoplanets that orbit them; and what these exoplanets are made of. An exoplanet is simply a planet that is orbiting another star (i.e. not in the Solar System).”

How do I become a citizen scientist?

"We are launching SuperWASP Variable Stars on the multi-disciplinary citizen science portal, Zooniverse. This is an opportunity for all those with a love of astronomy to contribute to international scientific research and further our understanding of the incredible Universe.

“Participating in the project is straightforward. First, visit the Zooniverse portal, search for SuperWASP Variable Stars, and watch the tutorial, which will guide you through how to classify a variable star. You will then view lots of lightcurves – graphs of how the star’s brightness varies with time – and categorise them. We need every lightcurve to be classified by at least five separate citizen scientists, so that’s why your support is so important.

“Once all of the lightcurves have been classified, we will be able to develop catalogues of the objects in the sky and focus our telescopes on the variable stars that are the most interesting.”

*The SuperWASP project is currently funded and operated by Keele and Warwick University, and originally established by Queen’s University Belfast, the Universities of Keele, St. Andrews and Leicester, The Open University, the Isaac Newton Group, the Instituto de Astrofisica de Canarias, the South African Astronomical Observatory, and by the Science and Technology Facilities Council (STFC)