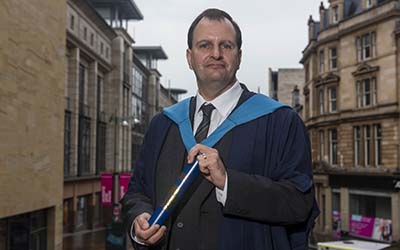 Scott Montgomery, who left school without any qualifications aged sixteen, graduated with a Bachelor of Arts degree with Honours in Social Science from The Open University (OU).

Having worked in construction and then as a bus driver, the dad-of-two juggled his family and work life with campus-based studies at Ayrshire College, via an OU partnership programme.

He said: “It feels absolutely terrific to have achieved my Honours degree, I’m ecstatic. I got a full-time job on a building site when I was 16 and left school – where I’d never really done very well - without sitting the O-Level exams.

It feels absolutely terrific to have achieved my Honours degree, I’m ecstatic. I got a full-time job on a building site when I was 16 and left school, without sitting the O-Level exams.

"I think that was quite typical at the time. But I regretted not staying on.

“I went back into education in my forties, encouraged by my wife, and didn’t really have any expectations. I just wanted to see if I could do an access course at Ayrshire College and see how it went. And it went great.

“I was encouraged by the lecturers and got through to the next year’s level. It just snowballed from there and each year went really well. I gained my HNC, and HND, Social Sciences.”

Scott, who received two awards as a college student, continued on to the Open University’s campus-based partnership with Ayrshire College.

“Being able to transfer full credit from my college HNC and HND to my OU studies was quite a big factor for me and was definitely important in my decision to carry on to the next level.

Studying with the OU’s a great opportunity for anybody, particularly if they’re trying to fit work around it, or if they’ve got family commitments where it’s not convenient to travel away to a brick university.

"To be able to go in to third year, that makes a big difference. It was pretty seamless.”

Criminology was Scott’s favourite course, and he valued contact with his supportive lecturer on the programme.

“I was over the moon to get my degree. Studying with the OU’s a great opportunity for anybody, particularly if they’re trying to fit work around it, or if they’ve got family commitments where it’s not convenient to travel away to a brick university.

"The whole thing seems to fit really nicely. It’s worked out fantastically for me.”

Supported on his studies by his wife and two children, Scott had established a routine.

“I’ve got an office at home, we’ve got a computer set up in the box room - a filing cabinet, a desk and a computer built in. Most nights I would set aside two or three hours, whereas before I would probably have been sitting watching the telly or relaxing.

“I managed to have a routine set out for myself, that I knew when I would be studying, when I would be working, and when we would go and do something fun, go out and do stuff.”

The Stewarton resident was diagnosed with dyslexia during his earlier study, and support continued in place during his degree.

Scott went on to complete a Leonard Cheshire-supported internship with the Department for International Development (DFID) as soon as his studies were finished.

“What they do and what they stand for is absolutely fantastic, and something you can feel quite proud to be a part of,” he says.

His degree studies were a springboard in his successful application. And Scott drew on skills gained during his studies, from time management to IT, while carrying out the internship.

Inspired by their work on poverty reduction and armed with his degree, Scott has applied to the DFID apprenticeship scheme.