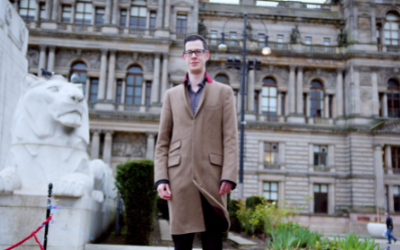 An established disability rights advocate and former member of the Scottish Youth Parliament, 27-year-old Steven is now studying a Bachelor of Laws Honours degree with The Open University. He’s determined to use his qualification to progress in his career – with ambitions to one day become Scotland’s First Minister.

“My hope is to become a Member of the Scottish Parliament to support and advocate for the rights and equality of people with disabilities,” he said.

“I think it’s imperative that we provide new and innovative ways to support people with disabilities, regardless of what that disability is, so that everyone has the right support to get through education, to get through mainstream society, and to have an equal chance as their able-bodied peers.”

A passion for championing others

Steven, who is visually impaired, had a stroke six months after being born and found his passion for supporting others while volunteering with charities such as the Royal National Institute of Blind People (RNIB).

He’s since gone on to represent visually impaired people in the Scottish Parliament and continues to advocate for people with disabilities around the world.

But to create lasting change, Steven realised that gaining a degree and a broader understanding of how policies affect people could open even more doors. That’s why he chose to study Law with the OU.

“Law was something that I was interested in doing because it goes hand in hand with politics and you can't really have one without the other,” said Steven.

“Having Law on my CV will give me an advantage in terms of being involved in politics. It will be good to have that legal knowledge so that I can hopefully put forward new ideas that may strengthen current or future policies.

“I also want to challenge policies that don’t benefit people who are disabled and don’t create equality.”

The support to succeed

Steven admits that returning to study so many years since he left school was initially daunting. Thankfully, he found the OU community incredibly welcoming and supportive.

“The OU tutors have been absolutely fantastic from the start,” he said, going on to praise the community of students, who he stays in touch with online and through WhatsApp.

Steven also found the OU’s introductory Access module a great way to boost his confidence before he committed to a full degree. The short course enabled him to get a feel for supported distance learning and the subjects before diving in, which made all the difference.

“I completed the Access module with a 73% overall score and then when I did my first year in Law, I got a Distinction grade of 88%. I believe that was a direct result of my participation in the Access module.”

Steven is especially passionate about breaking down barriers that many disabled people face in education and the workplace.

“Disability is something that can affect literally anyone, regardless of race, regardless of gender, regardless of anything else,” he said. “It’s about mitigating some of those unnecessary barriers and taking those away. The system can be very easy to fall through if you don't have that support.”

Now part-way through his degree, Steven is setting his ambitions high.

“The overall goal after I’ve graduated would be to continue to advocate for people with disabilities across Scotland and across the UK,” he said.

“I’m under no allusion that it’s going to take some time, but eventually I would like to try to become an MSP where I can advocate within Parliament. If I do get elected in the future, then I want to continuously make the public aware of issues that affect people with disabilities and for others.

“I want to work my way through the ranks and hopefully get as high as I can. Who knows, maybe one day I could become First Minister of Scotland!”

For anyone considering pursuing their own goals through a qualification, Steven had this advice:

“My advice and encouragement would be, if you have any thoughts that prevent you from studying with The Open University – put those aside.

“The Open University is a very inclusive way to learn, it’s a very open way to learn. It’s got a lot of avenues of support, whether it be from the tutors, the student support team, or the students themselves. Don’t let any inhibitions get the way of studying.”

Generation Change: The ones to watch

Steven is part of ‘Generation Change: Ones To Watch’, the co-branded docuseries with the OU and MTV. In each episode, host Henrie Kwushue meets the OU students that are not only changing their futures – but are busy tackling global issues related to the environment, equality and health.