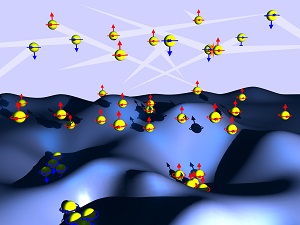 Spintronics is a hugely important scientific field which attempts to exploit the spin of the electron in addition to its electric charge. The field spans a large area of scientific endeavour from theoretical physics to industry and is a sub-discipline of nanotechnology.

The subject area began in the early 1990's, after Albert Fert and Peter Grünberg (who later received the 2007 Nobel Prize for their finding) discovered that the electrical resistance of certain magnetic nanostructures, could change drastically in response to an applied magnetic field. The effect, called giant magnetoresistance, relies on the conservation of spin-direction of electrons flowing through the structure.  This discovery was quickly developed commercially, and today all hard disk drives employ read heads which use this effect.  In fact, the modern day hard-disk read head is the first commercial device to utilise the spin of an electron rather than its electric charge.

Other spintronic devices currently being developed include, novel types of ultra-fast non-volatile memory and spin-based transistors and logic gates that use electron spin for information processing. Such devices may work with virtually no applied current, superseding present-day electronic technology and might hopefully provide a basis for scalable quantum computers.

Within the department, the work on spintronics focuses on both fundamental aspects of spin transport in magnetic nanostructures, and the modelling of structures with real-world applications. The work involves solving the Schrödinger equation for both simple models and realistic structures and employs both analytical pencil and paper calculations and high powered computational modelling.

For more information about this research area, see Andrey Umerski's research pages, or the article on Spintronics and Applications to Hard Disks.