Michael Wilkinson is using statistical techniques to analyse the motion of small particles in turbulent flows. This topic is important for understanding several poorly understood natural phenomena, including rainfall, planet formation, and the dynamics of sandstorms and avalanches. It has also led to the development of new mathematical techniques and physical insights. 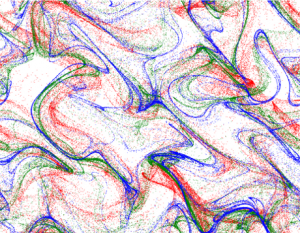 The figure on the right is an illustration of the intriguing questions that arise from these studies. It shows the positions of particles with three different masses (labelled by different colours) in a turbulent flow. The particles are very unevenly distributed. In fact, a careful analysis of these distributions shows that they are fractal measures, and that there are 'caustic' singularities embedded within them which are described by catastrophe theory.

Mathematical work at the Open University has shown how the Lyapunov exponents and fractal dimensions describing the particle dynamics can be computed using techniques borrowed from quantum mechanics, including surprising developments such as nonlinear annihilation/creation operators and applications of irrational-valued angular momentum quantum numbers. Other studies consider the alignment of anisotropic particles in complex flows: here some singularities which appear at first sight to be forbidden can actually occur. These singularities resemble those found in fingerprint patterns: they are visible in the image of the simulation of rod-like particles below, which is paired with a corresponding image of the same distribution using a visualisation technique which we have demonstrated experimentally. 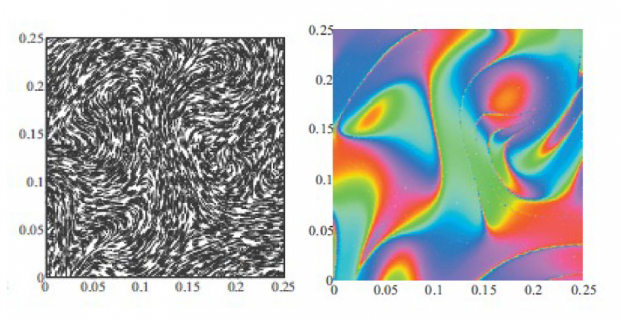 Turning to applications, it has been shown that caustics play a crucial role in determining the collision rates and relative velocities of particles in turbulent aerosols, and it was proposed that caustic induced collisions are pivotal in the formation of rain from shower clouds.