In the EPSRC grant EP/V007459/1, Reem Yassawi studies ways to compute the automorphism group and the Ellis semigroup for low complexity symbolic dynamical systems, including those defined by combinatorial rules called substitutions.

Symbolic dynamics is a branch of dynamical systems theory where where both space and time are discrete. It originated in the study of the recurrence properties of geodesic flows on surfaces. Today it is a wide area, attracting researchers in and ergodic theory and topological dynamics, encompassing the study of both positive entropy systems at one end, and small, self-similar dynamical systems at the other. 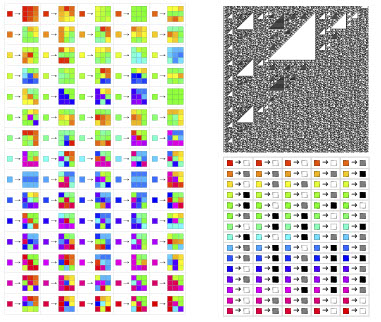 An example of a substitution rule (left), coding (below right), and an element of the phase space whose Ellis semigroup we would like to understand.