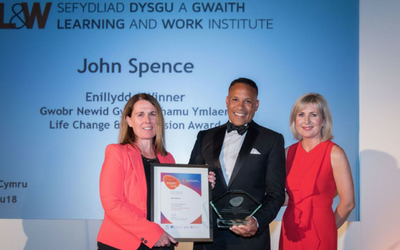 An OU in Wales student who was mocked at school and reached his mid-30s having never read a book received the Life Change and Overall Winner of the Year awards at this year’s Inspire! Adult Learning Awards.

Cardiff-born John Spence was bullied at school because he couldn’t read, and by the time he left aged 16, his confidence was so shattered that he’d developed a stammer -  but now he runs his own company training doctors all over the world after graduating with an OU science degree age 46.

On leaving school John joined the Army, serving in Afghanistan and Iraq as a medic and enjoying a successful military career, despite having never told anyone that he couldn’t read or write.

After leaving the Army John began working at sea as an ocean paramedic.  In that role he was referred to The Open University by an instructor, where it was discovered he had severe dyslexia, ADHD, and Meares-Irlen syndrome, which leaves the brain struggling to process visual information and affects reading ability.

John signed up to The Open University alongside his job at sea and had to overcome his extreme fear of education based on his experiences at school.

“The Open University became the family I never had. They helped me at every step - arranging a computer and software for me, and the books I needed.

“Every time I rang the Cardiff office, I could feel the excitement. Everyone was rooting for me. I’d never had that in my life.”

Last year, he graduated with a 2:1 in Health Sciences at the age of 46, describing it as the best moment of his life.

John is now an OU ambassador and has moved to Tenerife but still teaches in Cardiff and across the UK. The awards evening was made even more special when John used his acceptance speech to propose to his partner, Alexandro. They plan to marry next year.

On receiving his award John said “I now realise the power of education and how one person noticing your strengths can change your life. I never imagined life could be like this. I was failed by education the first time, but I’m so glad I was given a second chance. I owe everything to The Open University, and the doctors who told me I was worth something.” 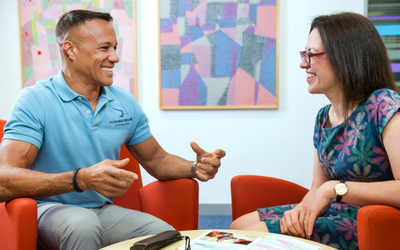 John was nominated for his award by Ceri Wilcock, Acting Assistant Director at the OU in Wales.  Ceri said:

“We are delighted to see John pick up this well-deserved award.  His learning journey has been incredible and it’s been a privilege to support him along the way.”

“John is so deserving of the Inspire! Overall Learner of the Year award.

“His story is an example of real determination against the odds, from someone who went on to excel in education in his 30s and 40s with hard work and incredible perseverance.

“It also reminds us of the power of mentors. Encouraging words, sometimes from just one person, are hugely powerful and can help somebody on the path to learning - and change their life.”

The Inspire! Awards are hosted each year ahead of Adult Learners’ Week which celebrates lifelong learning; whether work-based, as part of a community education course, at college, university or online.

Find out more about John’s story in this video. 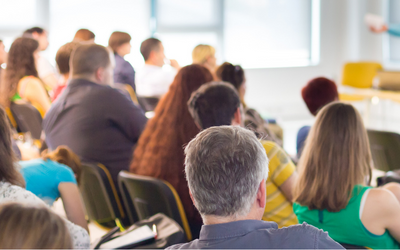