This blogpost by Elton Barker was originally posted on the blog Sententiae Antiquae, and republished here with minor alterations.

As some of you on the Twitterverse may have seen, all this month @OU_Classics has been celebrating the books that members of the department have published over the past few years. This has been a great way to find out what colleagues spend their “spare” time on, as well as to enjoy how the books look and to speculate on the choice of image—that arboreal skeletal hand gripping E-J’s book Death Embodied, for example, or the implied dialogue between Aristotle and Homer in Jan’s Homer’s Iliad and the Trojan War. 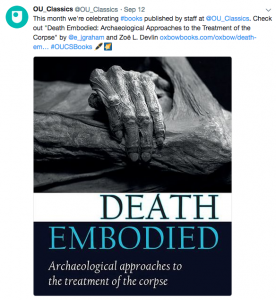 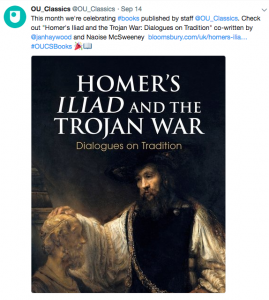 When my own book on debate in Homer, historiography and tragedy was tweeted, I was reminded of a couple of things about the title: specifically why I had chosen to treat those genres in that order (wouldn’t historiography have been better discussed after tragedy?), and my then students’ game, when Google was just becoming a thing, of typing “Entering the Agon” into the search box and returning the result “Do you mean Enter the Dragon?”. But it also got me thinking about my choice of cover …

With the possible exception of writing acknowledgements, I find choosing a cover image for a book arguably the most pleasurable, and most difficult, of the final tasks that needs accomplishing before I can happily pack off my manuscript on its merry way to the press. Even if we are told otherwise (in the famous axiom not to judge a book by its cover), how a book looks can play a decisive role in its purchase; after the subject matter and author, it’s the one thing that may determine whether I buy book a book or not. If I look on my bookshelves, for example, the dust jackets that stand out for me are: the famous image (from the so-called François vase) of Ajax carrying the dead body of Achilles that emblazons Greg Nagy’s 1979 classic The Best of the Achaeans (and Michael Lynn-George’s equally ground-breaking Homeric criticism Epos: Word, Narrative and the Iliad); the contemplative Regarding Penelope by Nancy Felson; the highly wrought, yet seductive, Medea of James Clauss and Sarah Iles Johnston; the satirical depiction of famous classicists playing characters from Aristophanes (!) on Martin Revermann’s Comic Business; and the striking pose of Gertrude Eysoldt captured in the role of Electra that advertises Simon Goldhill’s Who Needs Greek?. The arresting contemporary nature of this image (though the photograph dates back to 1903) hints at Goldhill’s thesis of the continuing legacy of Victorian attitudes to, and contests over, the Classics that shape and inform our own implicated relationship with the subject.

As these examples suggest, aesthetic looks isn’t the only desideratum when it comes to choosing a book cover. For sure we want something that looks good; but it’s equally, if not more, important for that image to say something about the book itself (a picture is worth a thousand words, right?), though perhaps not in an obvious or straightforward way. Let me explore this issue by reflecting on my own choice of three covers that I’ve had the pleasure to be able to choose.

The image I chose for my first book—Entering the Agon: Dissent and authority in Homer, Historiography and Tragedy (Oxford, 2009)—is in many ways very traditional. It’s the famous image (on the black-figure amphora by Exekias) of Achilles and Ajax playing dice. But it’s an image that worked for me not only because of its beauty—though hats off here to the team at OUP who extended the pot’s gleaming background (which sets off the black figures) to cover the entirety of the book’s cover in a fiery golden afterglow.

This image also spoke to my book’s subject matter: namely, the idea of contest (agōn) and its representation in ancient Greek literature. In truth, I had a hard time finding an image that worked for me. I wanted some kind of ancient Greek artistic representation; perhaps because it was my first book (the “book of the thesis”), I felt it needed to be unambiguously classical. It should have been easy, right, to find an image from the whole corpus of ancient Greek ceramics, right? Wrong. I could find none of the scenes of debate in epic, history and tragedy, which were the core focus of my argument, that had been illustrated, not even—as one may have expected—the quarrel between Achilles and Agamemnon that starts off the Iliad with such a bang. There is a fresco, highly fragmented, from Pompeii’s House of the Dioscuri (on exhibition at the National Archaeological museum in Naples), which shows Achilles going for his sword; and of course there are later Renaissance paintings depicting the quarrel (such as Giovanni Battista Gaulli’s baroque rendering). But I could find none from the world of ancient Greek ceramics or friezes—perhaps because, as Robin Osborne pointed out to me, Greek artists simply were less interested in illustrating literary stories than in creating their own. (It is striking that the wall paintings from Pompeii *do* look like illustrations of early Greek literary narratives, including the moment Euripides’s Medea ponders killing her children.) What Exekias’s scene of gaming heroes gave me was a hint not only of the formalisation of contest, but also of the prominence of Achilles (who in my argument institutionalises contest in the arena of debate) and, moreover, of his pairing with Ajax (whose story in Sophocles’s tragedy formed one of my chapters).

The second book I needed to choose an image for presented a rather different challenge. This was for an edited volume entitled: New Worlds out of Old Texts: Revisiting Ancient Space and Place (Oxford, 2016).

The book derived from an interdisciplinary project that I had led called Hestia, which investigated representations of space and place in Herodotus, as well as the spatial construction underpinning his Histories. At the heart of the book was a discussion of the different disciplinary approaches that we undertook, spread over three chapters (which I co-authored with different team members), exploring: digital annotation and mapping (with Leif Isaksen and Jessica Ogden), geographical spatial theory (with Stefan Bouzarvoski), and philological close reading (with Chris Pelling). Our resulting book included other contributors working in this space (pardon the pun), who had presented at our conference in Oxford, and who, like our team, represented an array of disciplines—not only Classical Studies, but also archaeology, digital humanities, and the history of thought. The image I wanted, then, needed to respect these different disciplinary approaches while at the same time hinting at ways in which they might be combined and intertwined (for interdisciplinary research). And, of course, it needed to be in some way spatial, to suggest the complexity of trying to represent and unpick spatial entities and relations. A web-designer friend (a shout-out here to Richard Rowley of Agile Collective) put me on to London-based artist Emma McNally, whose work attempts to “portray essence not as substance… but rather as the result of a process of reciprocal determination, where individual lines, markings, and trajectories are brought to significance through their interrelations with those around them” (https://www.flickr.com/people/emmamcnally/). After getting her approval (she was very happy for us to use her work provided that she got a copy of our book: gold armour for bronze, as Homer would say!), I chose her scratches, traces, spaces. This work on graphite (“a medium that lends itself perfectly to [a] sort of rhythmic making and unmaking. It is a material for palimpsest”: ibid) seemed to me to perfectly capture the spatial palimpsests that many of us were striving to reveal and more closely examine in our texts, while also being provocatively new and overtly relational. Emma later informed me that the very same artwork was used by Ridley Scott as a navigation map in his latest Alienprequel Convenant. If it’s good enough for Ridley…!

All this brings me to the last image—the one that Joel had invited me to write about in the first place… Our book, Homer’s Thebes, sets out to argue that the Iliad and Odyssey (mis)represent heroes and themes from the Theban tradition to set out and realise the unique superiority of these texts in performance. In arguing this, we are attempting to view the Homeric poems in a new light, by emphasizing a non-hierarchical model of “reading” them and the Epic Cycle together within the framework of oral-formulaic poetics and artistic rivalry. With this in mind, we wanted an image that suggested Homer in some way (epic poetry, heroes, etc.) but that wasn’t a straightforward classical take on that. From a very early stage I was convinced that a cubist painting of some kind would work, with that central idea of taking something familiar (for us, reading Homer; for Homer’s audience, the Troy story and the siege of Thebes) and, by viewing it from different perspectives, producing a radically different picture (a Troy story that emphasises internal conflict among the Achaeans, for instance). For me, cubist works echo the type of violent reception and adaptation that our book is about. But here we ran into a significant problem that meets anyone looking to reuse a contemporary image, whether that is a museum photograph of an ancient artefact or a modern painting in a gallery’s collection: copyright. For all the cubist paintings that I could find that seemed to dialogue with our approach, the answer kept coming back from our publishers that we couldn’t use them because of the copyright and/or the costs involved. Out went The Thebaid by Wyndham Lewis, along with his Composition; we fared no better with Barbara Hepworth’s Two Heroes; we couldn’t even use Le Poèteby Picasso, even though I had sourced it from Wikipedia.

Just as I was beginning to despair, and I thought that we would have to give up on this idea of a cubist-style makeover for our Homer, I had the inspiration to look for works by modern Greek artists. I knew that ever since the twentieth century, Greek writers and painters alike have been grappling with the problem of their country’s complicated (and often times suffocating) classical legacy. And thus I had the fortune to come across the work of Nikos Engonopoulos. He’s the painter most famous in Greece for revisiting classical themes in a distinct modern style (tending towards surrealism). Having found a number of post-classical images that I thought that we could use, I contacted the person responsible for his website and who owns the copyright to his works, his daughter Errietti Engonopoulou. Like Emma, Errietti could not have been more accommodating, and immediately allowed us to use a high-resolution image of the image that we decided on.

I present to you Engonopoulou’s 1939 oil on canvas The poet and the muse. We hope that you like it as much as we do.