Congratulations to Dr Paula James on the publication of her article on “Ovid’s Salmacis: a Literary and Sexual Hybrid”!

Regular readers of this blog may remember our earlier post about Ovid’s Salmacis, which included an audio extract and downloadable PDF of Paula’s article draft (which she generously shared while it was still ‘work in progress’). The final version of the article has now appeared in The Journal of Greco-Roman Studies Vol. 58-3. You can read the abstract at the bottom of this page, and visit our earlier blog post, to listen again to the Salmacis audio. 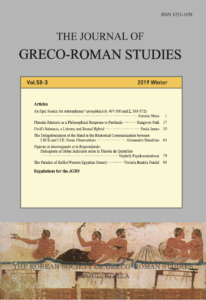 Abstract: This article engages with the ambiguities surrounding the identity of the naiad Salmacis in Book Four of Ovid’s Metamorphoses, the final story in a set of three told by the daughters of Minyas. Alcithoe is the narrator. The Salmacis myth is possibly one of the most slippery stories in Ovid’s Metamorphoses; to adapt the title of Georgia Nugent’s ground breaking article of 1989, Ovid is producing a text which is not one just as Hermaphroditus embodies ‘the sex which is not one.’ The naiad, Salmacis, is by her very nature an adaptable amphibian and an ideal medium to blur boundaries in gender physicality, as well as in behaviour. Like the son of Venus and Mercury she so passionately covets, Salmacis is visualised as a creature with hermaphroditic characteristics in advance of the bizarre coupling that produces a being of indeterminate sex.

The ambiguous nature of the water nymph who causes the final transformation of the boy is hardly highlighted although she too is a hybrid both behaviourally and elementally. Salmacis’ identity as girlish nymph and watery being, as a natural victim and a resourceful rapist, as a combination of feminine passivity and aggressive masculinity is realised through vivid direct description and highly associative imagery.

Building upon previous scholarly interpretations of the episode of Salmacis and Hermaphroditus, I shall argue that although Ovid confines Salmacis to shape shifting in the figurative sense (by his use of multiple metaphors) his similes are carefully chosen to align her with other fluid females in Ovid’s literary landscape who invariably suffer sexual assault and the risk of transformation or disintegration. However, Salmacis’ bodily dissolution follows her pro-active and predatory sexuality.

This article draws together previous approaches to Ovid’s Salmacis narrative, but introduces new perspectives upon the characterisation of the lustful naiad. I argue that Salmacis is both behaviourally and physically a fudged gender, a proto-hermaphrodite ultimately punished for her mimicry of masculine traits. This is deliberate as the figurative techniques are primarily designed to transport the reader to other victims in Ovid’s mythical landscape and to familiar erotic encounters in Greek and Roman literature. Drawing upon cinematic terminology, the moving images of the present day, we could say that the over-wrought similes she and the beautiful boy attract ‘scramble the pixels’ in visual terms.

Ovid’s version of events subverts the Halicarnassus inscription which was positive about the nature of the Salmacis pool and the relationship between its denizen and the son of Hermes and Aphrodite. My approach does assume that Ovid’s contemporary readership was not only educated but also revisited the text in order for these overall connections to gain their full force. The fleeting images, confusing in their immediate context, function like a cinematic montage as they evoke the fate of females who suffer bodily annihilation in the epic poem before and after the Salmacis episode.