Earlier this week I participated in The Student Hub Live 2015 (no login required!). This was a three day event streamed live online from Walton Hall in which different people from across the OU, including both staff and students, were invited to talk about what they do, conduct live experiments, engage in lively debate on everything from serial killers to language and literacy, and even have a go at this year’s quiz show: Wheel of Ologies.

This sort of online event is a great opportunity for students (and potential students!) to get a better sense of what we all do and to understand what makes the OU tick. Students who perhaps wouldn’t normally come to the campus in Milton Keynes can hear from a whole host of people who have a variety of roles in the university and can even interact with them via a chat stream or Twitter. This time around participants ranged from the new Vice Chancellor Peter Horrocks and the senior leadership team of the university, to those who run Library Services and the Careers Advisory Service, as well as central academic staff and other students.

The theme of this event was interdisciplinary study and it was tied closely to the BA/BSc(Hons) Open Degree. If you sign up to study for this degree you can tailor your studies to suit your own needs and interests. Not many other universities will let their students range quite so broadly across subjects as diverse as English literature, biology, Spanish, statistics, retail management, child psychology and of course Classical Studies! Effectively, then, the Open Degree lets you put together an entire degree programme that matches exactly what you want to study, even if these are subjects that might not normally be studied in parallel. For me, the Open Degree represents what the OU is all about: letting people who want to study do so in a way that works for them. 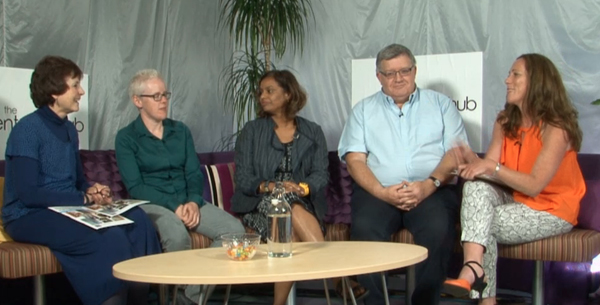 As part of the event, I was asked to contribute to a short ‘chat show’ on Tuesday evening, sharing a sofa with colleagues from the Faculties of Social Sciences and Health and Social Care who were talking about their research on subjects as wide-ranging as Scottish Independence, the recent General Election and the upcoming EU referendum, EU citizenship and identity, as well as the practical needs of an ageing population in Britain. It was a bit daunting being amongst people who work on issues that are so very ‘now’ but as I talked a bit about identity in the Roman empire and about how my work on anatomical votive offerings helps us to understanding how ancient people thought about their identities in relation to their ever changing (i.e. ageing) bodies, I realised that we had more in common than I first thought. Our methodologies are very different, the evidence and data that we work with is also very different, but we are all interested in people, how they think and how they understand and experience the cultural contexts in which they live. 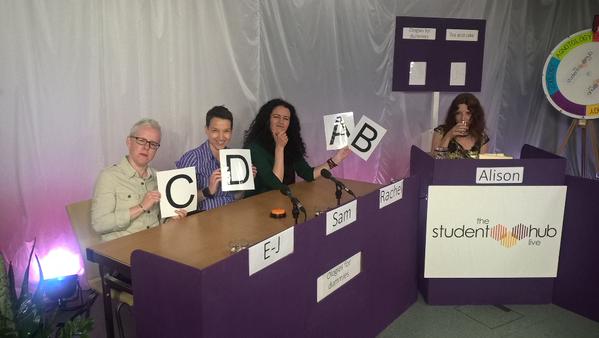 Team ‘Ologies for Dummies’ getting quizzical.

On Wednesday I took part in the Wheel of Ologies quiz which involved two teams with buzzers trying to outdo each other on general knowledge questions linked to different ‘ologies’ (e.g. zoology, epistemology, pantology, and the wildcard bonus category of ‘ninjology’ or the study of ninjas!). My team didn’t exactly romp to victory. In fact, we lost fairly dismally, although I was relieved to get a question about Caligula’s horse correct! It was great fun to mix in with current students, heads of other faculties and people based ‘behind the scenes’ at the Library, whilst the audience played along online (possibly with some help from Google!). For me, and I think for many students, this was one of the highlights of the whole event, reminding everyone that regardless of our roles in the university we are all just ordinary people who like to have a bit of a laugh, even if general knowledge quizzes are not everyone’s strong point!

Some catch up versions of the different Hub Live sessions should be available to watch on the website before too long and you might want to keep an eye out for the next Student Hub Live and even take part!