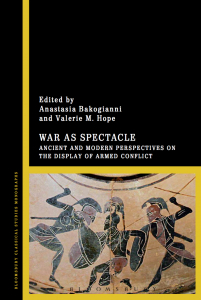 This autumn sees the publication of an edited volume to which several members of the OU Classical Studies department have contributed. War as Spectacle: Ancient and Modern Perspectives on the Display of Armed Conflict  (Bloomsbury) originated in an OU conference organised by Anastasia Bakogianni during her time in the department, and is co-edited by Anastasia and Valerie Hope, as well as featuring essays by Laura Swift, Naoko Yamagata and Emma Bridges.

The book takes an interdisciplinary and transhistorical approach, comprising eighteen essays which examine the ways in which war was presented as a multi-sensory spectacle in ancient texts and material culture as well as considering the reception of ancient conflicts since antiquity. Themes include the spectacle of combat in epic and lyric poetry, historiography and commemorative monuments as well as post-classical responses to ancient warfare, with chapters on film and the media, theatre and political propaganda.

To mark the publication of War as Spectacle Anastasia has recorded two interviews for Classics Confidential. You can see Sonya Nevin talking about her work animating hoplite scenes on ancient vase paintings here, and Anastasia talks here about her own chapter discussing the Euripidean anti-war trilogy of film director Michael Cacoyannis.