Last week was, for me, a week of Odysseys. The previous weekend I’d tuned in to catch up on this recent BBC spoof of Homer’s epic of homecoming by comedy trio Penny Dreadfuls, starring Peep Show actor Robert Webb as a hilariously self-obsessed Odysseus. The week also took me to London to see two very different live performances of the ancient tale. First up, on Tuesday, was a theatrical performance at the 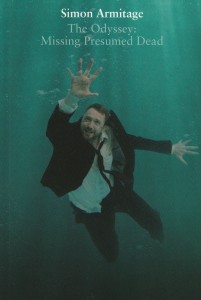 Globe of Simon Armitage’s The Odyssey: Missing Presumed Dead. This new version wove episodes from the ancient text – Odysseus’ encounters with a giant Cyclops, the Sirens, the Lotus Eaters, and the enchantress Circe – into a contemporary story featuring a government minister’s attempts to return home to his family after an unfortunate diplomatic incident abroad. The fusion of contemporary political drama and ancient narrative provided an insight into the possibilities which a classical text might offer for shedding fresh light on current issues, and vice-versa; in this case the themes of hospitality (and its abuse) and xenophobia loomed large, and the production – like the original Homeric text – explored the nature of storytelling from multiple perspectives, with the modern media and political spin highlighted as modern equivalents of the ways in which narratives are woven together by the ancient poet and his characters.

Then Thursday brought a very different kind of staged version of the poem. This year the Almeida Theatre’s Greeks season, consisting of productions of three Greek tragedies along with a programme of related events, has been hugely successful (you can read my interview with the theatre’s Associate Director, Robert Icke, here). To end the season the theatre staged an all-day reading of the Odyssey (in the translation of Robert Fagles) in its entirety; this followed on from a reading of the whole of the Iliad back in August. The Odyssey, read by sixty actors including such stellar names as Ian McKellen, Simon Russell Beale and Miranda Richardson, took its performers and audiences on an ‘odyssey’ of their own around London, both on foot and in various modes of transport including a London bus, several black cabs, a boat on the Thames and even the London Eye (where it was a stroke of genius to set the Cyclops episode). 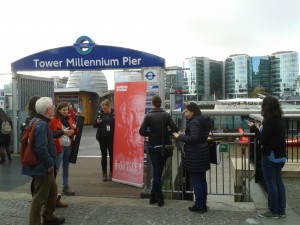 Waiting to board for our Odyssey along the Thames.

Four key locations were open to live audiences, while the whole event was livestreamed online. I was lucky enough to get a seat on the boat trip up the Thames, during which I was treated to a series of actors reading the section of the story beginning with Odysseus’ arrival among the Phaeacians; then I, like thousands of others, managed to catch much of the rest of the day’s action online via the livestream and on Twitter (for a flavour, and for comments by those who shared in the experience from locations around the world, take a look at the Twitter feed for @almeidaodyssey or search #Odyssey).

That this durational reading (it lasted from 9am until after 9pm, when it ended in a bar in Islington at which the Almeida team were holding their end-of-season party) of an epic poem which is over two and a half thousand years old had such reach and generated such a buzz (remarkably, #Odyssey was trending on Twitter for much of the day) was due in large part to the capacity which modern technology has for facilitating mass communication and fostering collective experience; this was on a scale far beyond anything which might have been imagined by the bards who originally sang the Homeric tales. It was also a reminder of the power of a good story to entertain and enthral. The Odyssey has it all – monsters and magic, peril and heroism, pathos and humour, as well as a colourful cast of characters both mortal and divine – and that is perhaps why it has proved to be such a rich source of inspiration for writers and artists ever since its original composition.

During my week of Odysseys, I’d also asked followers on Twitter to share their favourite modern receptions of the Odyssey – suggestions ranged from the Coen Brothers’ film O Brother, Where Art Thou? to Margaret Atwood’s novel The Penelopiad and the 1980s children’s television series Ulysses 31. I’d love to hear your suggestions too, either in comments on this post or over on Twitter, where you can find me @emmabridges.

Update 16th December 2015: You can now watch the Almeida Odyssey reading in its entirety online here.