I never intended to go on to do an MA, let alone an MA in Classical Studies, after my undergrad degree – BA (Hons) in Humanities with Music – but for the last module of that degree I chose a completely different subject ‘Myth in the Greek and Roman World’ and I became hooked on the classics. I was at a considerable disadvantage as I did not have a classical background, only a little Latin, but no Greek. My tutor gave me a list of books which helped increase my knowledge of the classical world before the first module began. Although the first year of the MA was a steep learning curve, it was very enjoyable, if tough. During the year I learned to improve my argument in my essays, and became more critical of academic writing. I developed a passion for the Etruscans after writing a TMA on the stork vase discovered at the Mola di Monte Gelato site in South Etruria. An essay followed on ‘Who were the Etruscans’ – a difficult subject to choose, as I soon found out! The Etruscans believed that there was a limit to the length a civilization would survive and it would indeed appear that after 800 years much of their own civilization was swallowed up by Rome. It was suggested I should consider archaeology for my dissertation topic, but I felt that was a learning curve too far. 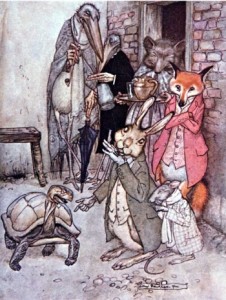 In the second year I had reached the module that had sparked my interest in the MA in the first place – The Greek Theatre. The role of powerful women in the tragedies of Aeschylus, Sophocles and Euripides proved a fascinating area of research. After the tragedians, Aristophanes took over my life. For the EMA I spent an absorbing period comparing the text of Wasps prepared in 1897 by the classics scholar and barrister Benjamin Bickley Rogers, which Vaughan Williams set to music for the 1907 Greek Play at Cambridge, with its English adaptation by David Pountney to fit the original music of Vaughan Williams.  Bickley Rogers’ expurgated version was appropriate to the sensibilities of the time, but Pountney reinstated most of the obscenities, taking a fair amount of liberty in his interpretation of the text and structure of the play. He was faced with the difficult task of finding lyrics to fit the metre of the original Greek text which Vaughan Williams had set to music. It was intended as a concert version in which one actor would play the roles of Philocleon and Bdelycleon, renamed Procleon and Anticleon in the Pountney version, which the Ralph Vaughan Williams’ Trust had commissioned to make the whole work (rather than just the Wasps’ overture) more widely known. I would argue that Vaughan Williams came out of it better than poor Aristophanes.

My dissertation was on the last two extant plays of Aristophanes – The Assembly-Women and Wealth – which involved a considerable amount of research on the politics and social changes of the time. The evolution of Aristophanes’ style from Old towards New Comedy played an important part in my argument: I compared these plays with the New Comedy style of The Old Cantankerous of Menander, a playwright of whom I had not heard before the MA. A month into the dissertation I had a crisis of confidence and requested to change the topic to a music-related one, but still remaining faithful to Aristophanes. I nearly gave my supervisor a heart attack, but after thinking about it for a nano-second, and much to my supervisor’s relief, I realised what a foolish idea it was, since all my research up to that point had been on the last two plays. I was assured that it would not be the only crisis of confidence I would go through during that year.

I have always enjoyed the research aspect of studying and I am now suffering severe withdrawal symptoms, as I have no present plans to go on to do a Ph.D, but Aristophanes is my constant companion and who knows where he will lead me next. Learning ancient Greek would be a good start….

11 thoughts on “My experience as an MA student, by Flora Stagg”