We asked our newest PhD student, Adam Parker, to tell us about his research project and the path that brought him to postgraduate study at the Open University. 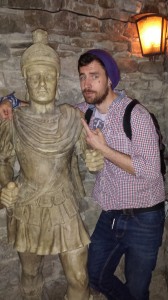 The life changing time for me, when I first started to get really excited about the ancient world, was at Durham 6th Form Centre, while doing an A-level in Classical Civilisation. It was over a decade ago now, but reading the Iliad, the Odyssey, and Sophocles’ Theban plays alongside Tacitus, Suetonius and doing a bit of Greek and Roman architecture still looms large in my head as the time when my eyes were opened to the complexity, importance and sheer murderous humanity of the ancient world. Fast-forward to May 2016 and I am five months into my part-time PhD research in Classical Studies at the Open University. My project aims to investigate the artifactual nature of ‘magic’ in Roman Britain and to try to establish chronological, spatial, material and contextual relationships within this huge, amorphous dataset in order to try and understand what magic is and what function it served.

The wonderful thing I’ve found about postgraduate studies with the OU is that the students here have usually gone off and done a bit of living before getting into the PhD research; I’m no different. Undergraduate studies in Ancient History and Archaeology at Leicester cemented my love of archaeology and the Roman world. This was the first time I ever encountered ‘magic’ as something that can be studied. A second year essay for a module on ‘the Roman Principate’ required students to sign up to a seminar group: 25 people, 5 seminar topics, and 5 places per slot. Getting a place on the ‘Magic and Imperial Politics’ seminar required sprinting from the lecture theatre where this announcement was made to the sign up board on the other side of the campus to ensure I got the place I wanted. Staying on at Leicester for a fourth year MA in Rome & its Neighbours allowed me to pick up Magic as a research topic for my dissertation.

Since that point I have never really left the topic alone. Having a consuming and unfaltering passion for history, heritage and archaeology is certainly a benefit in getting from undergraduate to PhD studies. Entering the world of museums in 2010 did mean that I got to play with loads of really cool material culture, but it also meant that I spent a lot of time driving vans and fork-lift trucks (for more of an insight into my day job take a look at this article). Since discovering the phrase ‘Independent researcher’ in 2011 I’ve gone out of my way to try and push my research agenda outside of my professional life. Commuting daily from Crook, Co. Durham to York – where I am currently Assistant Curator of Archaeology at the Yorkshire Museum – meant that I had 4-5 hours per day of bus and train time to kill reading and writing. OU courses in ‘Reading Classical Latin’ and ‘Heritage? Whose Heritage?’ filled in bits of that. (A quick piece of advice here: conjugating verbs and declining nouns on the bus to Darlington at 6:45am daily is not the best way to learn Latin.)

After 5 or 6 years of part-time study I want to end up with a database of a few thousand objects. Jet pendants, phallic carvings, and inscribed gold tablets might seem to be a disparate group of objects but they are all joined by a modern appreciation of them having served some sort of protective, beneficial, or lucky function in the Roman world. It is this supposed supernatural function that links these, and numerous other objects, together. My intention is to actually test this hypothesis through a broad artifactual study where I will start by deconstructing the semantics and implications of the word ‘magic’ and establish how this can be applied to material culture. Contextual, material and spatial studies will (hopefully!) establish themes, links and patterns within this dataset that can be used to build on our current understanding on how these things work. There are already some excellent material culture studies into Roman magic (most recently several papers in two entirely different 2015 publications with the same name, The Materiality of Magic) but these each focus on a specific object type, literary or iconographic element. My aim is to be the first to actually draw all of this together into one place and look it as a single group. It requires first negotiating some hugely problematic conceptual issues about what magic is, what religion is, and how we can differentiate enough to allow a useful programme of data collection.

It needs to go on record that I am sincerely grateful for being able to undertake PhD research with the Open University and with a scholarship to boot. My initial approach to the OU for PhD purposes is entirely due to a chat I had with Stuart McKie (fellow OU post-grad) after meeting at the Theoretical Roman Archaeology Conference in 2014. I gave a paper talking about magical things, he came and chatted to me afterwards about his own research on magic, and a series of Facebook conversations afterwards pointed me towards his supervisory team – Ursula Rothe and E-J Graham. And now they are my supervisors too, joined by Helen King. Under the tutelage of my OU triumvirate the past five months have focused on this attempt to try and establish what magic actually is… I’m not sure I’ve managed it yet it, but it’s been great fun so far trying to find out!

I am very happy to be a research student in the Classical Studies department – thanks for having me, OU.

Editor’s note: Adam has his own blog, where you can read more of his thoughts on Roman magic: https://romanmagic.wordpress.com/ You can also find him on Twitter @adamarchaeology.