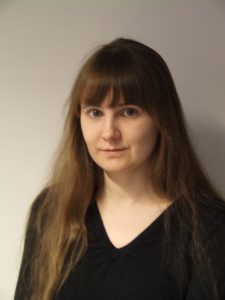 OU Music is delighted to welcome Dr Laura Hamer to the position of Staff Tutor in Music. Dr Hamer is a cultural musicologist specialising in women in music, encompassing both classical and popular traditions. She studied music at the universities of Oxford, Cardiff, and the Université de Paris IV (La Sorbonne). She is a Fellow of the Higher Education Academy.

Hamer has previously worked at the Open University as both a lecturer and an AL. Between 2012 and 2017 she worked for Liverpool Hope University, including four years as Head of Music. At Liverpool Hope she led on redesigning the undergraduate and postgraduate taught provision, and acted as course leader for both the BA and MA programmes in music. She has also taught music at Cardiff University, Rose Bruford College, and Royal Birmingham Conservatoire of Music. She served on the Central Committee of the National Association for Music in Higher Education (NAMHE) between January 2014 and December 2016.

Hamer has published articles and book chapters on a wide range of female musicians, including composers, songwriters, conductors, and all-woman orchestras, and also on Olivier Messiaen, Gerard Manley Hopkins, reception and criticism studies, and digital musicology. Her monograph, Female Composers, Conductors, Performers: Musiciennes of Interwar France, 1919-1939, was published by Routledge in 2018. She is also editor of The Cambridge Companion to Women in Music since 1900, forthcoming with Cambridge University Press. She is currently working on a joint research project which investigates the Liverpool-based dance-band leader Mary Daly Hamer (no relation) with her Liverpool Hope colleague, Dr Mike Brocken.

Byron Dueck is Senior Lecturer in Ethnomusicology and Head of Music at the Open University.
View all posts by Byron Dueck →
This entry was posted in News and tagged Laura Hamer, research, teaching. Bookmark the permalink.