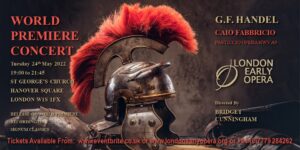 The conductor, harpsichordist and OU PhD student Bridget Cunningham brings Handel’s pasticcio opera, Caio Fabbricio HWV A9, back to life in a concert by London Early Opera on 24 May 2022 – the first modern-day concert performance of the work.

Caio Fabbricio was first performed in London in 1733 and is based on an earlier opera by Johann Adolf Hasse. It is an internationally important work and contains a brilliant and well-considered collection of some of the finest 18th-century Neapolitan arias by composers such as Hasse and Leonardo Vinci, all chosen by Handel and woven around his own dramatic recitatives.

The plot looks back to Ancient Rome when the incorruptible Roman ambassador, Caio Fabbricio, was sent to Tarento to restore peace and order between republican Rome and the Greeks under the leadership of the warlike King Pyrrhus (Pirro) in the wake of the latter’s self-damaging ‘Pyrrhic’ victory in 280 B.C.

Bridget is currently studying towards a PhD in music at the OU, funded by an AHRC OOC stipend and supervised by Dr Helen Coffey, Professor David Rowland and Professor Donald Burrows. Recently she gave a paper for the Open University Music Research Day which explored Hasse’s operatic music and Handel’s pasticcios including Caio Fabbricio – a piece that she has researched, edited and recorded in her Handel series with Signum Records. You can listen to part of the recording here.

Tickets for the concert can be purchased here. 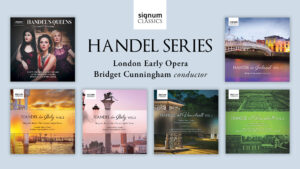