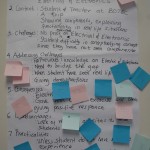 A further pedagogical patterns session was held to investigate the good practice of teaching and learning in Botswana.