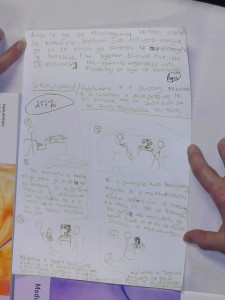 During 2012, we conducted two pairs of studies, one in Botswana and one in the UK, with students who were studying the same Interaction Design undergraduate module from The Open University UK. In all studies, participants were asked to focus on designing an interactive product that would remind home-based patients to take their medicine on time. The first of the pair was a constrained task protocol study in which participants were asked to complete an interaction design task in a limited amount of time.  The resultant protocols were analysed to investigate detailed design behaviours of our participants using a new approach to protocol analysis based on Schön’s design reflection cycle, specifically tailored towards interaction design. The second study comprised a video diary conducted over a four-week period.

The video diaries and design prototypes were analysed to identify socio-cultural factors that affect the design process and product. During 2013 we conducted workshops with local educators (one in Botswana and one in the UK) to identify pedagogical patterns related to the identified behaviours. Our overall findings so far show that: