The first half of 2017 has seen the publication of several new books by members of the Ancient Body cluster in the department of Classical Studies, so we thought we’d share with you some further details. 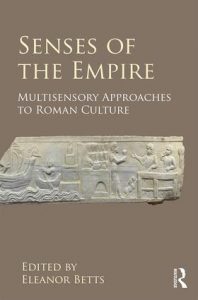 This new edited volume addresses the growing field of sensory approaches to Roman material culture. Extending beyond the presentations from the November 2013 conference held at The Open University Regional Centre in Camden (London), this volume discusses the value of integrating sensory perspectives into existing archaeological, historical and literary analyses of the ancient world. Amongst the chapters you will find important new explorations of theoretical and methodological approaches to ancient sensory studies, as well as specific case studies on urban sensescapes, Roman funerals, entertainment venues, the smells of the military fort of Vindolanda, the sounds of the tuba, touching and tasting in animal sacrifice, the visual and tactile aspects of signet rings and votive dedications, and the motion of pantomime performances. Several contributors are members of the Classical Studies department: Eleanor Betts, Emma-Jayne Graham and Valerie Hope. From the cover:

“The Roman empire afforded a kaleidoscope of sensations. Through a series of multisensory case studies centred on people, places, buildings and artefacts, and on specific aspects of human behaviour, this volume develops ground-breaking methods and approaches for sensory studies in Roman archaeology and ancient history. Authors explore questions such as: what it felt like, and symbolised, to be showered with saffron at the amphitheatre; why the shape of a dancer’s body made him immediately recognisable as a social outcast; how the dramatic gestures, loud noises and unforgettable smells of a funeral would have different meanings for members of the family and for bystanders; and why feeling the weight of a signet ring on his finger contributed to a man’s sense of identity. A multisensory approach is taken throughout, with each chapter exploring at least two of the senses of sight, hearing, smell, taste and touch. The contributors’ individual approaches vary, reflecting the possibilities and the wide application of sensory studies to the ancient world. Underlying all chapters is a conviction that taking a multisensory approach enriches our understanding of the Roman empire, but also an awareness of the methodological problems encountered when reconstructing past experiences.” 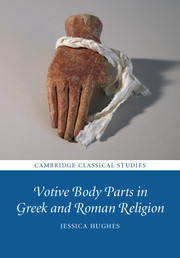 This major new monograph began life as part of a Leverhulme-funded project titled Changing Beliefs of the Human Body based at the University of Cambridge (2005-2009). By exploring a range of different forms of anatomical votive, across the ancient Mediterranean and parts of Europe, the book ‘aims to track how and why the anatomical votive cult developed and spread in classical antiquity, and to shed light on some of the varied meanings that these objects held for their ancient users and viewers’ (p. 3). By bringing votive body parts into a conversation with other visual and literary sources from the classical world, it emphasises their importance for a wide range of topics in classics, as well as demonstrating how votives intersect with modern theories and perceptions concerning the body. From the cover:

“This book examines a type of object that was widespread and very popular in classical antiquity – votive offerings in the shape of parts of the human body. It collects examples from four principal areas and time periods: Classical Greece, pre-Roman Italy, Roman Gaul and Roman Asia Minor. It uses a compare-and-contrast methodology to highlight differences between these sets of votives, exploring the implications for our understandings of how beliefs about the body changed across classical antiquity. The book also looks at how far these ancient beliefs overlap with, or differ from, modern ideas about the body and its physical and conceptual boundaries. Central themes of the book include illness and healing, bodily fragmentation, human-animal hybridity, transmission and reception of traditions, and the mechanics of personal transformation in religious rituals.” 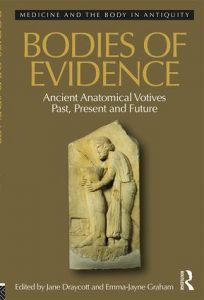 Continuing the anatomical votive theme, the origins of this edited volume lie in a conference held at the British School at Rome in June 2012. Contributors to the book explore not only the roles that anatomical votive offerings played in ancient religious and healing contexts but also the roles their subsequent collection and study continue to play in shaping ideas about the human body today. Chapters include examinations of confession stelae, swaddled babies, hair, eyes, wombs, feet, and open torsos, as well as topics such as fragmentation and disability, museum collections and new chronological and theoretical assessments. Emma-Jayne Graham and Jessica Hughes, from the Classical Studies department, are both contributors. From the cover:

“Dedicating objects to the divine was a central component of both Greek and Roman religion. Some of the most conspicuous offerings were shaped like parts of the internal or external human body: so-called ‘anatomical votives’. These archaeological artefacts capture the modern imagination, recalling vividly the physical and fragile bodies of the past whilst posing interpretative challenges in the present. This volume scrutinises this distinctive dedicatory phenomenon, bringing together for the first time a range of methodologically diverse approaches which challenge traditional assumptions and simple categorisations. The chapters presented here ask new questions about what constitutes an anatomical votive, how they were used and manipulated in cultural, cultic and curative contexts and the complex role of anatomical votives in negotiations between humans and gods, the body and its disparate parts, divine and medical healing, ancient assemblages and modern collections and collectors. In seeking to re-contextualise and re-conceptualise anatomical votives this volume uniquely juxtaposes the medical with the religious, the social with the conceptual, the idea of the body in fragments with the body whole and the museum with the sanctuary, crossing the boundaries between studies of ancient religion, medicine, the body and the reception of antiquity.”