Emma Bridges introduces a new project which aims to increase the provision of Classical Studies and Ancient History qualifications in UK schools. 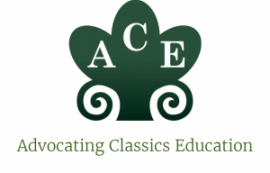 I’m thrilled to be a patron of Advocating Classics Education (ACE), a new AHRC-funded project which aims to extend the provision of qualifications in Classical Civilisation and Ancient History for 14-18 year-olds across the UK. Led by Prof. Edith Hall and Dr. Arlene Holmes-Henderson of King’s College London, the project is also supported by colleagues in sixteen partner universities, one of which is the Open University.

I first encountered the classical world by way of an ‘A’ level in Classical Civilisation at the state sixth-form college I attended in County Durham. An enthusiastic and dedicated teacher sowed the seeds of my lifelong interest in the ancient Greeks and Romans, and I’ve been hooked on Classics ever since. Qualifications in Ancient History and Classical Civilisation, like the course I studied for ‘A’ level, make the classical world accessible through translated texts, which allow teenagers the opportunity to engage with the diverse range of sub-disciplines of which Classics is comprised – whether that’s literature, archaeology, history, politics or philosophy.

Saturday 1st July 2017 saw the official launch event of ACE. Hosted by the project team at King’s College London, it was attended by schoolteachers and representatives from partner universities (I and my colleague Henry Stead were there on behalf of OU Classical Studies) and national bodies like Classics for All (a charity which helps teachers to introduce or expand Classics provision in their schools) and the Institute of Classical Studies. We talked about ACE’s plans for seeding Classical Civilisation and Ancient History in more schools across the UK, and about the challenges and opportunities with which we’re presented, as well as about the events which partner universities will host in order to showcase all that’s great about studying classical subjects (the OU will host such an event in March 2018). 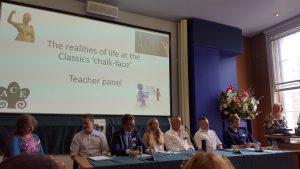 Teachers talk about life at the Classics ‘chalk-face’.

But for me the most inspiring part of the day was hearing from schoolteachers themselves about the work which they’re doing to introduce the next generation to the classical world. I recognise in these teachers the enthusiasm and dedication which my own ‘A’ level teacher brought to the subject. Many of these teachers refer modestly to themselves as ‘non-specialists’ – that is, they initially qualified in another subject, like English, History or Philosophy, and then went on to develop (often independently) their own understanding of ancient Greece and Rome so that they could offer Classical Civilisation or Ancient History at their school. You can read the story of one such teacher, Paul Found – a former OU Classical Studies MA student – in this blog post. These individuals are remarkable both for their commitment to developing their own subject knowledge and the extra time which they devote to increasing access to Classics – from running after-school clubs and arranging events celebrating the ancient world to staging classical drama. The enthusiasm which they generate in their own pupils as a result is truly extraordinary to see; I’m delighted to be part of a project which enables universities to do more to support their work.

Watch this space for more news on the OU’s involvement in the project. For further information about how you can get involved (as a teacher, supporter or volunteer), visit the ACE website. There’s also a survey about Classics education which you’re encouraged to complete – this will help to inform the project’s work over the coming months.