Carlos is spending the summer with us in the department of Classical Studies, as a Visiting Research Student. In this post, he introduces himself, and tells us about his research project.

In the first pages of Promethea (1999), a comic book by the British writer Alan Moore, we meet Promethea, a young girl who lives in 5th century A.D. Roman Egypt. At the beginning of the story, she has been chased by an angry Christian mob that has just killed her father for being a ‘Hermetic’ philosopher. In the middle of the desert, a strange deity suddenly appears, introducing himself as Hermes-Thoth, and addressing the girl with these words: ‘Now everything is well’. This was my first contact with Hermetism. 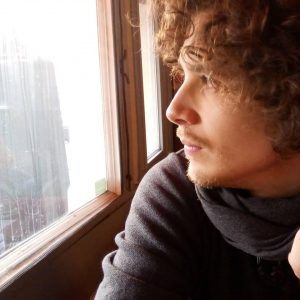 After completing my Bachelor in Classical Philology at the Universidad de Sevilla (2013), I moved to Madrid to do a Masters in Classics (2013-2014). There, I first encountered both Classical Reception theory and Hermetism. In my Master’s dissertation, titled ‘Prometheus in Feminine: Uses of Classical Elements in Alan Moore’s Promethea’, I studied the reception of the classical world in this comic, which masterfully combines mysticism, superheroes, science-fiction and fantasy, and I discovered that Hermetism was the main element of the classical world to be reimagined in its pages. Later, I started my PhD under the supervision of Prof. Luis Unceta at the Universidad Autónoma de Madrid. The title of my dissertation is ‘Hermes Trismegistus: from mysticism to fantasy. Survival of the Hermetic Texts from Antiquity to the present day’, and it focuses on the reception of the Hermetica in 19th to 21st century fantasy, occult and science fiction literature, in authors such as Edward Bulwer-Lytton or Alan Moore.

But what exactly are Hermetism and the Hermetic Texts? The Hermetica, as they are commonly known, are a group of texts from the 2nd-3rd century AD related in one way or another to the wisdom and teachings of Hermes Trismegistus, a legendary figure resulting from the union of the Greek god Hermes and the Egyptian god Thoth, two popular deities which shared a similar set of attributes. The Hellenistic fusion of the Graeco-Roman and Egyptian worlds gave birth to a shared cultural milieu, which led to the apparition of this syncretic figure, part god, part prophet. The texts cover a wide range of subjects, and they have traditionally been categorized into two broad ─ and usually problematic ─ groups: ‘philosophical-religious’ and ‘technical’. Under the first label we find texts that exhibit a sort of knowledge in accordance with the Neoplatonic traditions of the first centuries of our era. The second label comprises texts dealing with alchemy, magic or astrology which, ultimately, are the foundation of our modern ‘occult sciences’. Although this categorisation is useful, it has been frequently challenged: religious and philosophical material is to be found within the technical Hermetica and vice versa.

In the Renaissance, a Hermetic revival starring scholars such as Marsilio Ficino, Giordano Bruno or Cornelius Agrippa, who worshipped Trismegistus as a forerunner of Plato and Pythagoras, shone a light on the Hermetica, which were then profoundly reinterpreted. Hermeticism was again trendy for almost two centuries. Later, classical scholarship proved that the texts weren’t so old as first thought, and with the arrival of the Enlightenment, they were condemned to what we call Occultism, in the wide sense of the term. It is in the 19th century that the Hermetica are again recovered, this time by members of esoteric and occult societies such as the Hermetic Order of the Golden Dawn and the Theosophical Society, many of whom also happened to be literary authors, for example Arthur Machen or Dion Fortune. Thanks to the work of these authors, hermetically influenced ideas became part of the basis of the popular fantasy and science fiction genres throughout the 20th century. And that’s how we arrive at Alan Moore and other comic book authors.

How does Hermetism and Hermetic ideas permeate modern and contemporary literature, and especially those genres? How does it intertwine with the formats in which it appears, such as comic books? How does the reception of Hermetism after the Renaissance work? How has it modelled our own perception of some aspects of antiquity? These are some of the questions that my dissertation poses, drawing on Classical Reception theory as the best framework to approach the ups and downs of a trend of thought traditionally considered peripheral to the canon of Classical Studies, and therefore highly neglected by mainstream research.

I would like to express my gratitude to the Department of Classical Studies of the Open University and especially Dr. Joanna Paul for having accepted me so kindly for a research stay from July to September. I have just arrived and feel very welcomed already. I’m sure I am going to learn very much in the company of such an amazing faculty. I’m very happy to share these months with you all.

Carlos can be contacted on carlos.sanchezp@uam.es.