Recently I’ve been making some headway with a new research project which looks at the wives of soldiers in ancient myth, and the ways in which the stories of these ‘military wives’ might be compared with the experiences of modern day women whose partners are serving in the armed forces. I have a special interest in the figure of Penelope who, as the archetypal faithful ‘waiting wife’ of ancient literature, has been reimagined by authors and artists in a vast range of contexts ever since the composition of Homer’s Odyssey.

I’ve talked in an earlier blog post about my broader interest in the reception of ancient themes and texts, an interest which I share with other members of the OU Classical Studies department. It’s a rare event, however, when a contemporary reworking of an ancient story comes along which tunes in so precisely with one’s own individual research project. The recent production of Penelope RETOLD, however, did just that for me. This one-woman play written by Caroline Horton, who herself plays Penelope in the show, finds its title character marooned on the bed she shared with Odysseus in the days after he has returned to Ithaca and then left her alone again. In contrast with the Odyssey, where Penelope is very much on the sidelines, this version of the myth allows her to tell her own story, and it is a story which paints a picture of Penelope as a ‘military wife’, many of whose emotions and experiences would be recognisable today to the spouses of serving military personnel the world over.

I was lucky enough to have the opportunity to talk to Caroline as she was rehearsing for the play earlier this year, and to record an interview with her for our online journal Practitioners’ Voices in Classical Reception Studies (you can read the interview here). In light of my own research it was fascinating to learn about how, in devising the show, she too had spent a lot of time reading about, and talking to, women who had been through the ordeal of separation from a loved one who is away at war. This weekend the play reached the end of its 2015 run, and yesterday I was able to see the final show at the HUB theatre in Leeds. This intimate performance space, housed beneath disused railway arches and with a seating capacity of only 80, was the perfect venue for a sold-out audience to encounter Penelope at close quarters. 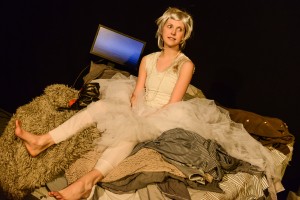 At times playful and at others simply heart-breaking, this Penelope has a voice of her own, one which is largely absent from the Homeric version of her story. Her recollections of her relationship with Odysseus – from her loneliness and isolation in his absence, to her jealousy of Calypso, her pride in her husband’s reputation and the complex mix of disbelief, joy, and anger on his return – are both enthralling and moving. Aspects of the myth recognisable to those familiar with ancient poetry are woven seamlessly together with contemporary elements, as Penelope records an interview for a website aimed at an online community of military wives, or anxiously listens to the shipping forecast in the hope that it will shed light on the whereabouts of her husband. Penelope RETOLD thus gives us a Penelope whose situation is recognisable in the twenty-first century, yet one who is nonetheless firmly rooted in the ancient tradition within which her story was conceived.

Coincidentally at the weekend I also spent some time teaching students on our module Myth in the Ancient Greek and Roman Worlds; in the course of the tutorial we discussed some of the reasons behind the longevity of the ancient myths. We came to the conclusion that a key factor which has contributed to their continuing appeal is the sheer flexibility of these stories; they can be almost infinitely adapted and updated to appeal to new audiences and to shed fresh light on issues of contemporary relevance. That the story of Penelope, a story which originated thousands of years ago, still has the power to captivate a twenty-first century audience is testimony both to the universal human appeal of ancient myth and to the brilliance of the creative practitioners who have revisited this enduring tale from a new perspective.