This week I’ve been lucky enough to see productions of two Greek tragedies in London. The first, Euripides’ Bakkhai, was at the Almeida Theatre; the second, a version of Aeschylus’ Oresteia, was also an Almeida production but after a highly successful run earlier in the summer it has now transferred to Trafalgar Studios in the West End. The experience of watching, on consecutive days, two very different plays whose production and performance contrasted strikingly with one another, set me thinking about what we can take away from actually seeing a performance of a play rather than simply reading it as a text on a page. 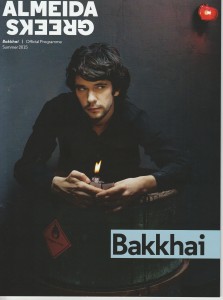 As a classicist with a particular interest in the reception of Greek literature I spend a lot of time thinking about how the context in which a text is written/read/viewed/performed/rewritten affects both the appearance of the text itself and an audience’s response to it. When we look at Greek tragedy and its manipulation of ancient myths (themselves fluid stories which did not have a fixed form, but which evolved depending on who was telling the story, to whom, and the context in which it was being told) this becomes interesting in all sorts of ways. For me, one of the things which makes tragedy so thought-provoking is the way in which it takes themes which are universally applicable to the human condition, and looks at some heavy moral questions (What is justice? Who gets to decide who lives and who dies? Are divine laws more important than those made by humans?). These questions, which exercised the theatregoers of fifth-century Athens, are not confined to one era or geographical location. This is precisely why Athenian tragedy can be transferred to new contexts, and why it has enjoyed a long and varied performance history.

Bakkhai – in the translation of Canadian poet and classicist Anne Carson – took what might be described as a fairly traditional approach to the staging of the play, in which the god Dionysus, walking the earth in disguise as a mortal, wreaks terrible revenge upon those who deny his divinity. This production broadly maintained the structure of Euripides’ original text and made use of a full Chorus, whose note-perfect singing was one of the highlights of the play; their odes, echoing the themes of the play – nature versus civilisation, irrationality and madness versus rationality and sanity, belief in the gods versus scepticism – provoked for me a series of reflections on the significance of religious ritual in the original performances of tragedy and offered an insight into how this might have appeared when performed in the Theatre of Dionysus in the fifth century BC. By contrast, the Oresteia – a new version by the Almeida’s Associate Director Robert Icke, 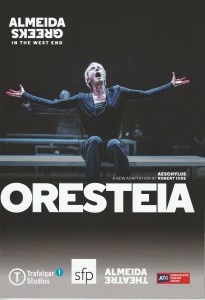 which condensed the three separate plays of Aeschylus’ trilogy into one new play – was undeniably contemporary in both its setting and its structure, with Agamemnon reimagined as a modern politician whose actions as he carries out his civic duty have unbearable consequences which rock the foundations of his family and reverberate down the generations. In watching both plays I was struck overwhelmingly by how many of the questions which these stories raise have their equivalents in our own generation. Bakkhai, for example,focuses on the nature of religious belief, or superstition, and asks why some embrace it, yet others scorn or fear it. Meanwhile the Oresteia raises questions about loyalty and sacrifice, asking whether one death can ever be excused if it saves countless other lives, and whether revenge can ever be justified or appropriate.

Ultimately what makes these dramas so gripping is that they are essentially human stories, and there is a sense in which the viewers of a play see elements of themselves, and their own world, reflected back to them. This week I was beguiled by a disquieting Dionysus who was by turns charismatic and sinister; I recoiled at the horror of Agave’s slaughter – blinded by Bacchic madness – of her son Pentheus; I shared in Agamemnon’s conflicted loyalties and his impossible moral dilemma as he sacrificed his daughter for the sake of his army; and I lived through Clytemnestra’s maternal anguish as she wreaked her bloody revenge for the death of her child. That live performance of tragedy still has the ability to engender strong emotional responses and provoke profound reflection reminds us of the enduring power of these ancient narratives millennia after they were first conceived.

One thought on “Thinking through theatre”