OU Classical Studies MA student Suzanne Slapper shares her experiences of bringing the joys of the ancient world to schoolchildren.

As is so often the case, my obsession with Classics started when I was a child. I remember a man coming to our junior school to talk about Greek myths; I was captivated. So, when ‘Jason and the Argonauts’ later came on TV, I watched it in awe and spent a whole summer fighting imaginary skeletons grown from teeth. 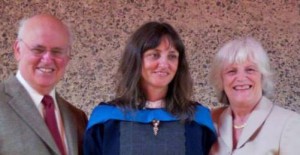 Graduating with my BA

Unfortunately, I could not pursue this interest at school, but the seed had been sown and so, as soon as I was able, I opted to take a little course in Latin. Well, we all know that Latin is a gateway drug and it wasn’t long before I was onto the hard stuff – yes, ‘Continuing Classical Greek’. The years sped by and before I knew it I had my BA. I am now in the second year of the fantastic MA in Classical Studies, all thanks to the Open University and its mission to educate anybody and everybody who comes knocking. I really love the interdisciplinary approach of the MA course, and have found all the varied aspects of it stimulating. The structure of the material interweaves the development of the students’ research skills with the imparting of scholastic knowledge in a way that is seamless. So I am now looking forward to writing my dissertation in the summer, rather than dreading it, as I have been able to practise all of the necessary steps in a carefully gradated way.

Ah, but I’m getting ahead of myself! Let’s rewind a bit. I was a couple of years into the BA when I was thinking about how fantastic it is that the OU brings Classics to all and wishing that I’d had the same opportunity at school. I guess that’s what led me to contact The Iris Project. This educational charity was founded by Lorna Robinson with the idea of bringing Classics to children who would not normally have access to it. I was welcomed on board and soon found myself editing the online version of the Iris Magazine. This was great fun and afforded me opportunities to see behind the scenes at the Fitzwilliam and Ashmolean museums and even handle some of their artefacts. 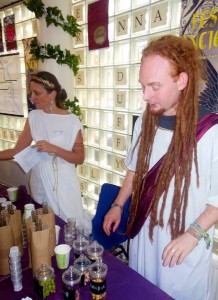 As my MA has progressed, I have less time to spend on the magazine, but I am still involved with the project’s Classics days at the East Oxford Classics Centre. Yes, people flock from miles around to see my Roman herb stall – oh, and to listen to the speakers, I guess! On one occasion, a certain Helen King came to speak. If I remember correctly, it was an ‘eye-opening’ account of being a Roman soldier with conjunctivitis – if that’s not an oxymoron.

So this year I decided to set myself a further goal and take some direct action in the area where I live. I plucked up the courage to email the local junior school to ask whether they would be interested in my giving some enrichment classes for their pupils. An email popped back with a ‘yes please’ within five minutes! I ran a class on ‘superheroes’ ancient and modern just before Christmas and it really was the best experience. Just like me, the children all seemed to have a natural interest in the subject and soon we were discussing the underlying structures of superhero plots. I was very impressed by the level of understanding; in fact, at one point it got pretty philosophical about the difference between a superhero and a god. In the end the children decided that Dr Who was indeed godlike, but that Harry Potter was ‘just’ a superhero. I then read a version of the myth of Perseus as a way of thinking about the same issues, and the children went on to write some wonderfully imaginative stories of their own using a similar structure. I had super… -men, -women, -boys, -girls, -plants, -dogs, -cats, -robots, and even -hair. I’m not sure what the class teacher thought about it all, but they have asked me back to run some classes about the Olympics in the summer, and the class seemed delighted!

Even if I have managed to plant a seed of interest in just one of them, that would be a matter of huge excitement for me. Who knows where it might lead to – maybe one of them might be a future OU MA student?

So now for my next challenge…big school!

One thought on “Of scholarship and superheroes”