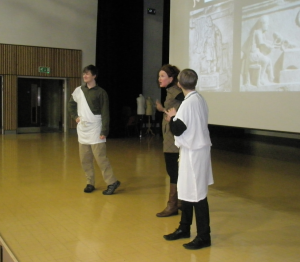 OU Classical Studies Lecturer Ursula Rothe has been visiting school pupils to talk about her research on Roman dress.

On 2nd March I went to Redborne Upper School in Ampthill, Bedfordshire to give a talk to senior school pupils on the topic of Roman dress. It was the first time I had done something like this with props – I had spent a weekend sewing together Roman garments like male and female tunicae, an exomis, a palla and a toga complete with detachable purple stripe! In all, 65 students turned up to learn about how dress not only reflected but was actively used to enact specific roles in Roman society, such as

The enthusiasm of the students was overwhelming and I was only sorry that not everyone got to dress up!