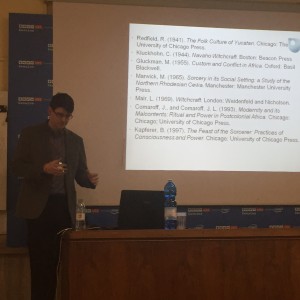 Jessica Hughes and Stuart McKie both presented in a session on Thursday entitled Appropriating Traditions, Negotiating Forms: Material Culture and Roman Religion Between Categories and Variables. The session was organised by Katharina Rieger from the University of Erfurt, who had asked us to consider “how [we] might make use of standardisation, appropriation and transformation when dealing with the varieties from the world of things.”

Jessica considered these issues in relation to the votive offerings she works on, revisiting the ancient and modern terminology for dedications; she also explored how digital technologies such as data-tagging and cluster analysis might lead us towards new ways of dividing and classifying the millions of votive objects that survive from the ancient world.

Stuart then looked at how the categories developed by scholars in relation to Greco-Roman curse tablets might be applied or re-invented in relation to the North-Western curse tablets that he is studying in his PhD. His paper emphasised the role of social context and on-going personal relationships in the creation of the tablets, and drew parallels with anthropological case studies from traditional cultures in the modern world. (Visit Stuart’s blog to find out more about this topic!) 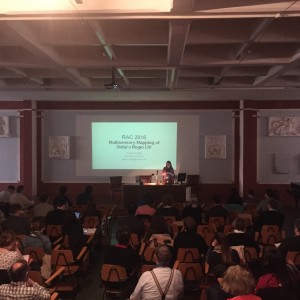 A distance shot of Eleanor Betts, talking about Ostia and the Senses

Eleanor Betts had organised a whole panel on Sensory Archaeology, and this took place on the Friday morning. Taking as its theme the multiple perspectives of sensory space, this session explored the role played by the senses in recognising, understanding and using Roman urban space, with a specific focus on movement within the cities of Rome, Ostia and Pompeii. Eleanor’s own paper (‘Multisensory Mapping of Ostia’s Regio I.IV’) demonstrated the extent to which reconstructing sensory data might alter our perceptions of ancient cityscapes. (You can read more about Eleanor’s work on the senses on the Sensory Studies in Antiquity blog).

When the conference drew to a close on Saturday afternoon, many of the delegates made their way down to the Roman Forum. A number of us spent the afternoon exploring the church of Santa Maria Antiqua, which had re-opened with great ceremony earlier that week when the icon of the Madonna had been brought ‘home’ in a procession from the church of Santa Maria Nova. We were quite amazed by the museological techniques that the curators had used to bring the wall-paintings alive, such as the lasers projecting colours, details and explanatory text on top of the faded frescoes.

Individually, we managed to fit in several other research-related visits to Roman museums. On Wednesday Jess met the painter Umberto Passeretti at Trajan’s Markets to interview him about his exhibition ‘Un presente antichissimo’ for our OU e-journal Practitioners’ Voices in Classical Reception Studies. It was fantastic to walk around the temporary exhibition – arranged amidst the ancient sculptures – and to listen to the artist talk about his classically-inspired paintings of myths and bodies.

Jess and Emma-Jayne also went the Capitoline Museums to visit the exhibition Capitol. Myth, Memory and Archaeology, although we spent an equal amount of time gazing at the tiny gemstones from the collections of the Fondazione di Dino e Ernesta Santerelli. 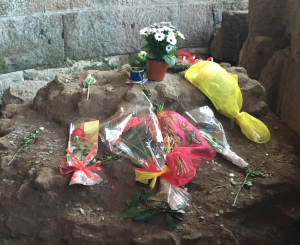 Offerings left at the remains of the Temple of Julius Caesar in the Forum Romanum to mark the Ides of March.

Before the conference started on Tuesday, Stuart witnessed a fatal stabbing at Largo Argentina… well, the re-enactment of one anyway! It was the Ides of March, and a local historical re-enactment group put on a dramatization of the assassination of Julius Caesar – it was quite an experience! Also while in the city, Stuart had a look at the new display of the curse tablets from the Fountain of Anna Perenna in the Epigraphic Museum at the Baths of Diocletian. It’s a great display, and shows not only the curses themselves but the magic dolls and other ritual objects deposited in the fountain.

Since at least one other OU Classicist is going to Rome this year, we thought it was only fair to share our best food-related discoveries too!

For lunches around the forum/Piazza Navona area we would recommend the Antica Birreria Peroni. It has a nice atmosphere (lovely frescoed walls), and a reasonably-priced menu; dishes include Roman classics like spaghetti cascio e pepe and is open throughout the afternoon (useful if, like us, you lose track of time in the museum!)

If you are after artichokes (carciofi) or just something a bit more traditional, try Trattoria da Giggetto located right next to the ancient Portico d’Ottavia.

La Sapienza University is in the area of San Lorenzo, which is a little way from the city centre. But if you find yourself there, we’d highly recommend a visit to Pinsa e Buoi.

Everyone has their favourite place for ice-cream in Rome so why not try them all?! Emma-Jayne’s favourite is San Crispino, just round the corner from the Trevi Fountain on Via della Panetteria (they also have a shop close to the Pantheon) and highly recommends their ginger and cinnamon or straciatella flavours.  There’s also a San Crispino’s at Fiumicino airport! 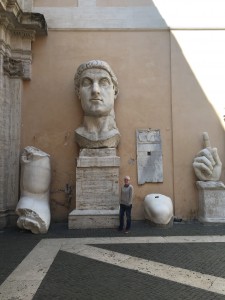 Emma-Jayne (and Constantine) in the Capitoline Museums