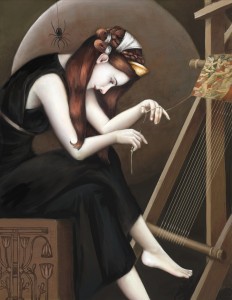 Arachne weaving her final tapestry, by Carlyn Becchia (www.carlynbeccia.com/) Reproduced by kind permission of the artist.

Earlier this month the Open University’s Camden office hosted an event entitled ‘Remaking ancient Greek and Roman myths in the twenty-first century’. The aim of the day was to bring together academics and practitioners whose work focuses on contemporary versions of the mythical tales of ancient Greece and Rome. Myth is by its very nature pliable, and this means that it has always offered a rich source of inspiration for creative practitioners who have sought to rework these ancient stories in new contexts – historical, geographical and artistic. For those of us who study the reception of the ancient world in the post-classical era there is a wealth of myth-themed material which provides us with the opportunity to think about how these new contexts shape such creative responses, and to consider some of the reasons why these stories have enjoyed such longevity.

Since joining the department of Classical Studies I’ve particularly relished the chance to work on our online journal Practitioners’ Voices in Classical Reception Studies, interviewing some of those for whom sources and themes from the ancient world have provided a stimulus for their own creative endeavours. This opportunity to engage with those whose creative work intersects with some of my own academic interests has been particularly valuable and thought-provoking, and it was with this in mind that I sought to bring together a whole range of practitioners and academics working on ancient mythical themes for this one-day colloquium. The day featured poets, playwrights and novelists, as well as those working on visual art and digital media; it was a huge privilege to hear these creative voices presenting, reading from and discussing their own artistic outputs. The colloquium culminated in a spell-binding performance from members of Blazon Theatre (one of whom, actress Laura Martin-Simpson, is studying for a Classical Studies degree at the OU), who brought to us a rehearsed reading of extracts from their new play, ICONS, which reimagines the myths of the Amazons for the twenty-first century.

You can read the abstracts of talks which were given here, and there is a Storify of livetweets from the day (via #OU21Cmyth), featuring images and audio clips, here. Thanks also to one of the participants, the poet Gareth Prior, who has put together a blog post reflecting on the day’s events. The conversations which the event opened up are set to continue in various forms; in light of the number of offers of papers received, we are discussing running a follow-up event, and there will be further news in due course as to how we plan to disseminate more widely the day’s proceedings. Watch this space!