The case of Burns’ desk suggests that the desk, however authentic, is not always adequate as the imagined ground of writing. Sometimes the chair will take the imaginative weight instead. Here are four ‘writer’s chairs’ that test that hypothesis. They all address the question of how to imagine the ‘work’ of writing – what sort of work it is, and what demands it makes upon the writer. 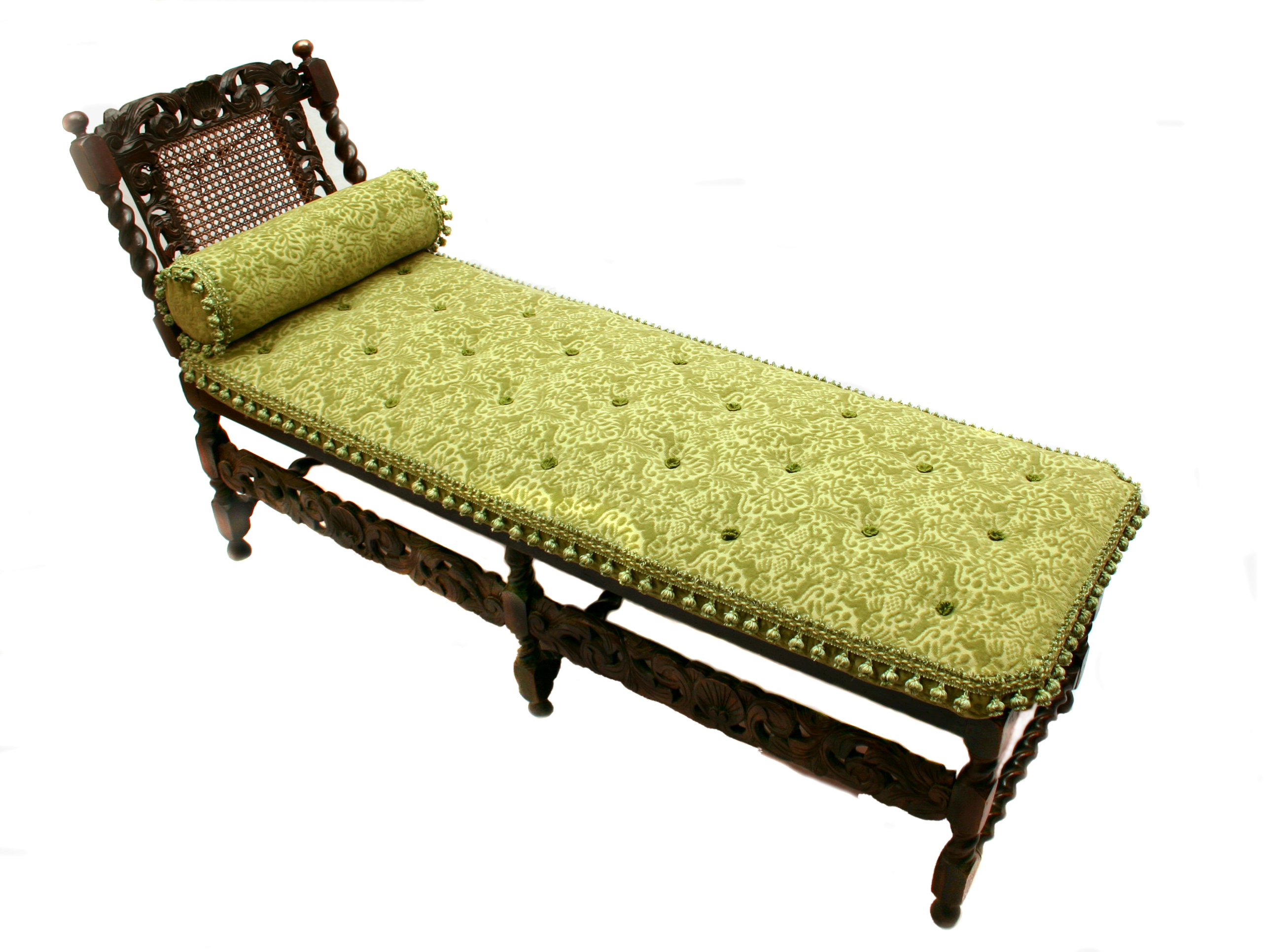 This day-bed was actually used by the poet William Cowper, but is a writer’s ‘chair’ more in the sense that it is the inspiration of writing. It appears at the beginning of Cowper’s great poem, The Task (1785), which opens with the surprising statement, ‘I sing the Sofa’. His friend Lady Hesketh had endeavoured to rouse him from his characteristic depressive idleness by setting him a homework ‘task’, to write a poem on the subject of the sofa sitting right there in his parlour. As a writer’s chair, it describes writer’s block just as much as it describes the writer’s work. 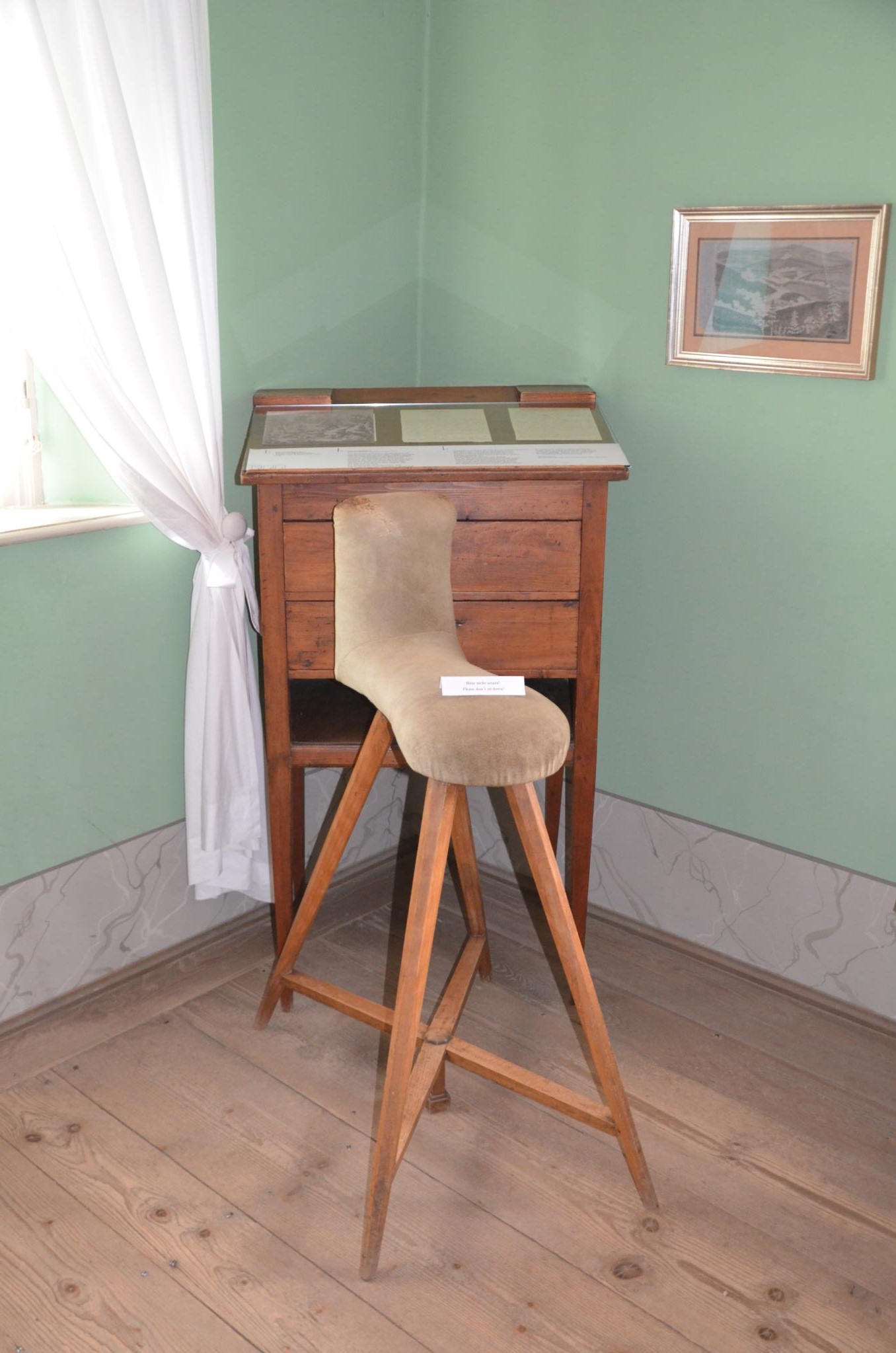 Another chair that is not quite what you’d expect. This chair was specially designed by Goethe to save his spine, and mimics horse-back riding. This speaks of Goethe’s inventiveness, but it also admits that the work of writing takes a defined physical toll. Bad backs and poor circulation are endemic amongst writers, and they devise all sorts of ways round it: many writers, for example Nathaniel Hawthorne, have gone in for ‘standing-desks’; A.L. Kennedy reportedly has a chair that tips her heels up above her head. This witty photograph, however, through doubling Goethe’s chair with a racing bicycle, thinks of it too as a mode of transport – a touring Pegasus among writer’s chairs. 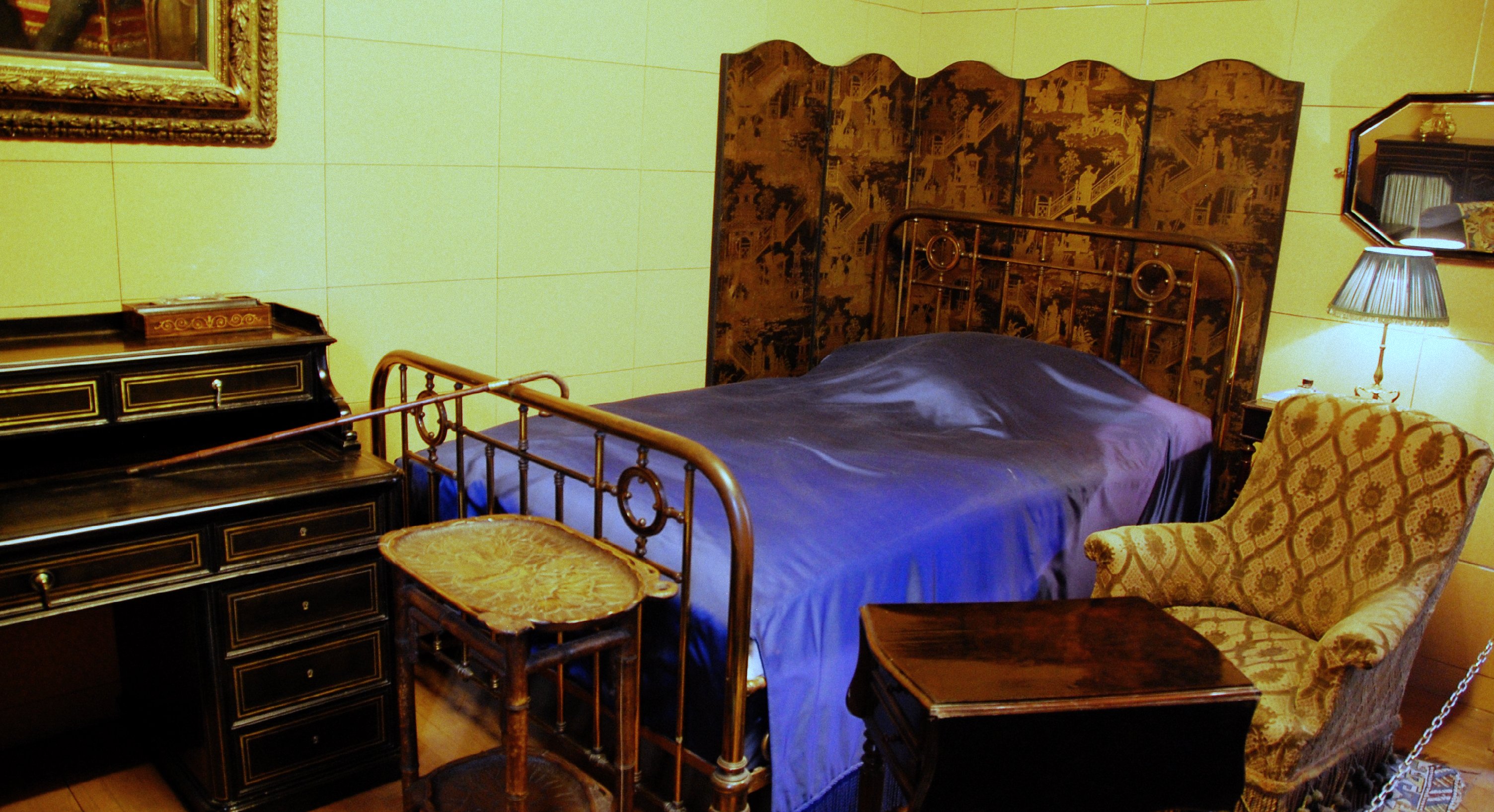 Proust was one of many writers who chose to write in bed – something that seems to have been very fashionable in French and Francophile circles at the very end of the nineteenth century. Famously he took this to extremes, in that he had this cork-lined room built to shut out the city-noise of Paris and so allow him to dream his way back into his memories. This bed conceives writing as solitary dream, rather than as professional work, and is in accordance with the opening of the first volume of A la recherche du temps Perdu (1913) with its lengthy meditation upon sleep as a form of imaginative ordering. As he put it in The Way by Swann’s: ‘A sleeping man holds in a circle around him the sequence of the hours, the order of the years and worlds’.

This piece of furniture, long known as Shakespeare’s courting-settle, is old but not quite old enough to have belonged to Shakespeare, or been sat on by him. It became famous in the nineteenth century because he was supposed to have courted his future wife Anne Hathaway on this very settle, a romantic fiction designed to redeem what the Victorians were increasingly inclined to suspect was the Bard’s Bad Behaviour.  Note the teasel-heads nonetheless; this is still not a seat for just anyone to sit on.