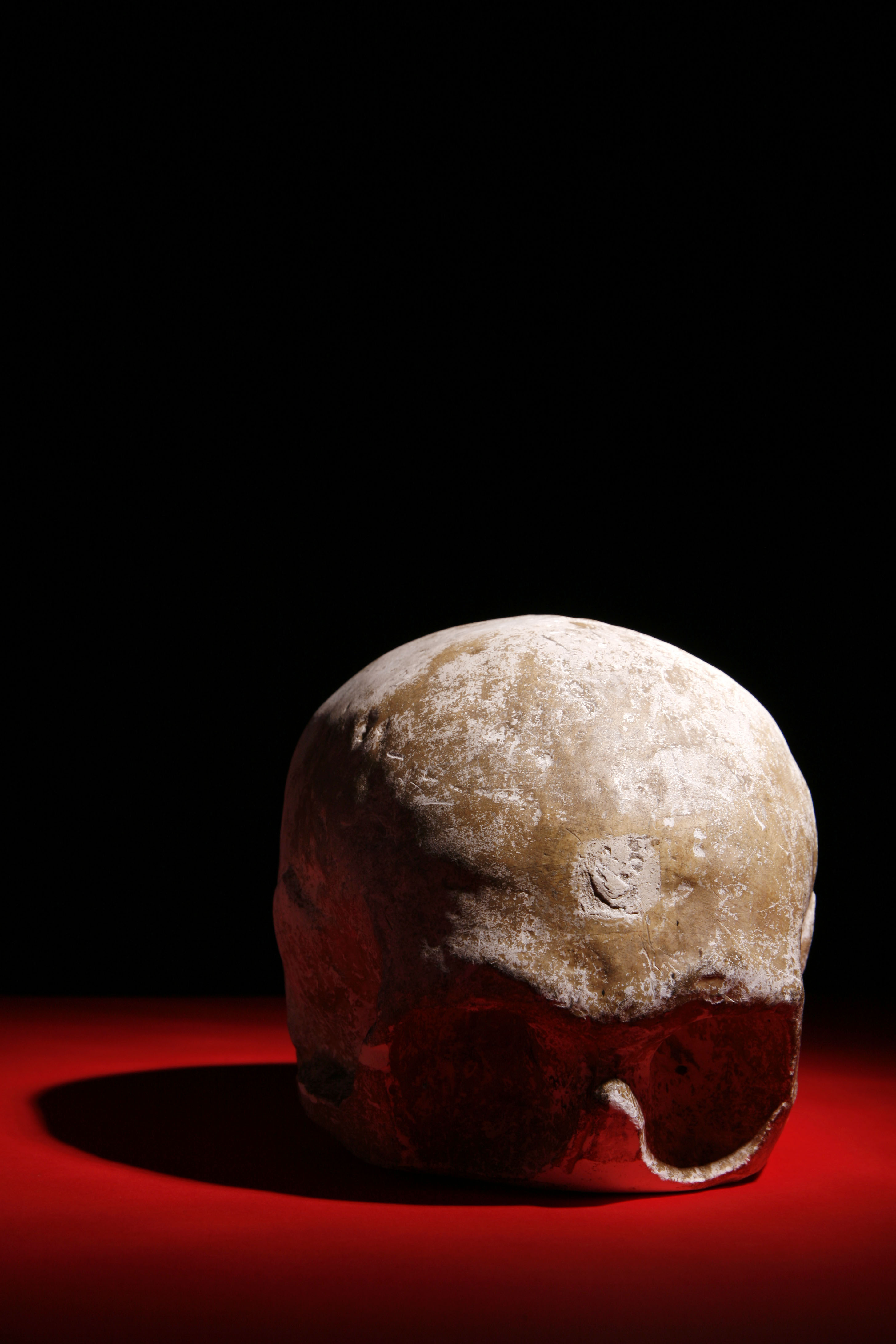 Today I am in leafy Alloway, Scotland, the birth place of Robert Burns. Despite the prettiness of this quaint and picturesque village, I have come to feast my eyes upon something entirely morbid. I am here to visit the Burns Birthplace Museum, and to view one of the Museum’s most startling exhibits. In the Museum’s entrance exhibition is an opaque mirrored cabinet. If you pass straight by, you see only your reflection. But if you press the inviting button which illuminates the interior, you come face-to-face and eyeball to eyeball with a life-size, full-colour, 3D forensic reconstruction of Robert Burns’ head. A short distance away, there is another cabinet which contains a cast of the poet’s skull, which, in 2013, served as the basis for the reconstruction.

That there is such a cast is the result of Burns’ remains being twice dug up on account of his growing posthumous reputation as national bard. Burns died in Dumfries on 21 July 1796, and was buried in St Michael’s Churchyard, Dumfries. This grave achieved some early fame beyond the locality, most famously visited by William and Dorothy Wordsworth in the summer of 1802. Yet, as I touched on in an earlier post, there were early complaints that the grave did not seem to accord the poet enough importance. The first attempt to have a more suitable memorial erected was made in 1812, by a John Forbes Mitchell of Bombay, and in 1813 William Grierson and John Syme, friends of the poet, formed the Burns Mausoleum Committee, launching a fund for the erection of a mausoleum on a different site within the churchyard. In September 1815 the body was moved to its new resting-place. But it wasn’t allowed to rest for long. Burns’ widow Jean Armour, who died in March 1834, was set to be laid along with Burns within the mausoleum. When the mausoleum was opened up in anticipation of her burial, access was allowed to Burns’ body. Having obtained permission from the family, a party of men, including John McDiarmid, editor of The Dumfries Courier, a surgeon, Archibald Blacklock, and James Bogie, who had helped move the poet’s coffin in 1815, entered the mausoleum. They located the skull, cleaned it, and took a plaster cast, before placing it in a lead casket and reburying it.

The first exhumation marked a change in the poet’s status from that of a well-known local to a ‘genius’ of national and international stature hailed by posterity. The account of the appearance of the body, circulated in 1815, was consistent with interest in preserving Burns as living memory. According to the account, the body was still in its entirety and relatively fresh (pardon me if you’re eating). The second exhumation was seemingly driven by scientific curiosity; Blacklock was impressed by the excellent condition of the cranium, which provided a much sought-after model of the immortal Poet’s head. A single cast seems to have been made initially, and then a number of subsequent copies.

The cast has served from the outset to give scientific authorisation to biographical narrative. When examining the cast in 1834, Burns’ biographer, George Combe, concluded in his Phrenological Development of Robert Burns (1859) that: ‘The skull indicates the combination of strong animal passions, with equally powerful moral emotions….The combination…bespeaks a mind extremely subject to contending emotions – capable of great good or great evil…’ Subsequent to the craze for studying the skull, the cast has been used to evidence the reality of Burns’ body. It functioned, for example, together with the portrait of Burns by Alexander Nasmyth, as the model for Sir John Steell’s sculpture of Burns made in 1886 that graces Central Park, New York as well as sites in Dundee, London, and Dunedin. More recently, it was the basis for the forensic reconstruction of Burns’ face carried out by the Professor of Craniofacial Identification, Caroline Wilkinson and her team at the University of Dundee in 2013. Her remarks in ‘The Real Face of Robert Burns Revealed’, recorded in The Scotsman on January 24th of that year, underscore the ways this exercise was meant to reanimate ‘Burns in his full living glory,’ to give him birth again within Scotland on his birthday:

To be able to reveal the 3D head of Burns to Scotland and the world is an immense privilege for us, and all the team have watched this head develop and take on character over the last year. Finally we can see this charismatic poet as others would have seen him in life and it has not been disappointing.

Professor’s Wilkinson’s remarks suggest forcibly the imaginative difference between the skull itself, presumably still in its leaden casket below the Burns Mausoleum in Dumfries, and the cast of the skull in the Museum. If the reburial of Burns in the mausoleum was all about raising Burns’ national and international status, the cast and the reconstructed head works to supply readers with privileged access to Burns’ subjectivity.

From this morbid tale of the fate of Burns’ remains we can draw a number of interesting conclusions. While the forensic reconstruction of Burns’ head reveals the desire to verify the writer’s body, and especially the head, as physical evidence of ‘genius’, the reconstruction of Burns’ head specifically commissioned for the Burns Birthplace Museum exemplifies the perceived need to rescue the author’s body from the common wreck of mortality and to organise it in some more meaningful relation to place. What both of these acts enable is the possibility of personal physical encounter and recognition: as twenty-first century readers, we are offered the opportunity to come face-to-face with the historical writer, in all his reconstructed glory.