On April 23rd this year of lockdown, I celebrated Shakespeare’s Birthday by standing outside the Birthplace in Stratford-upon-Avon. Henley Street, which would usually have been filled with flags, processing dignitaries, onlookers, and living statues was almost deserted. So I had an excellent view of Stratford’s latest exercise in place-making, a new statue of Shakespeare, standing plumb in the middle of the street on a modest plinth close by the Birthplace. 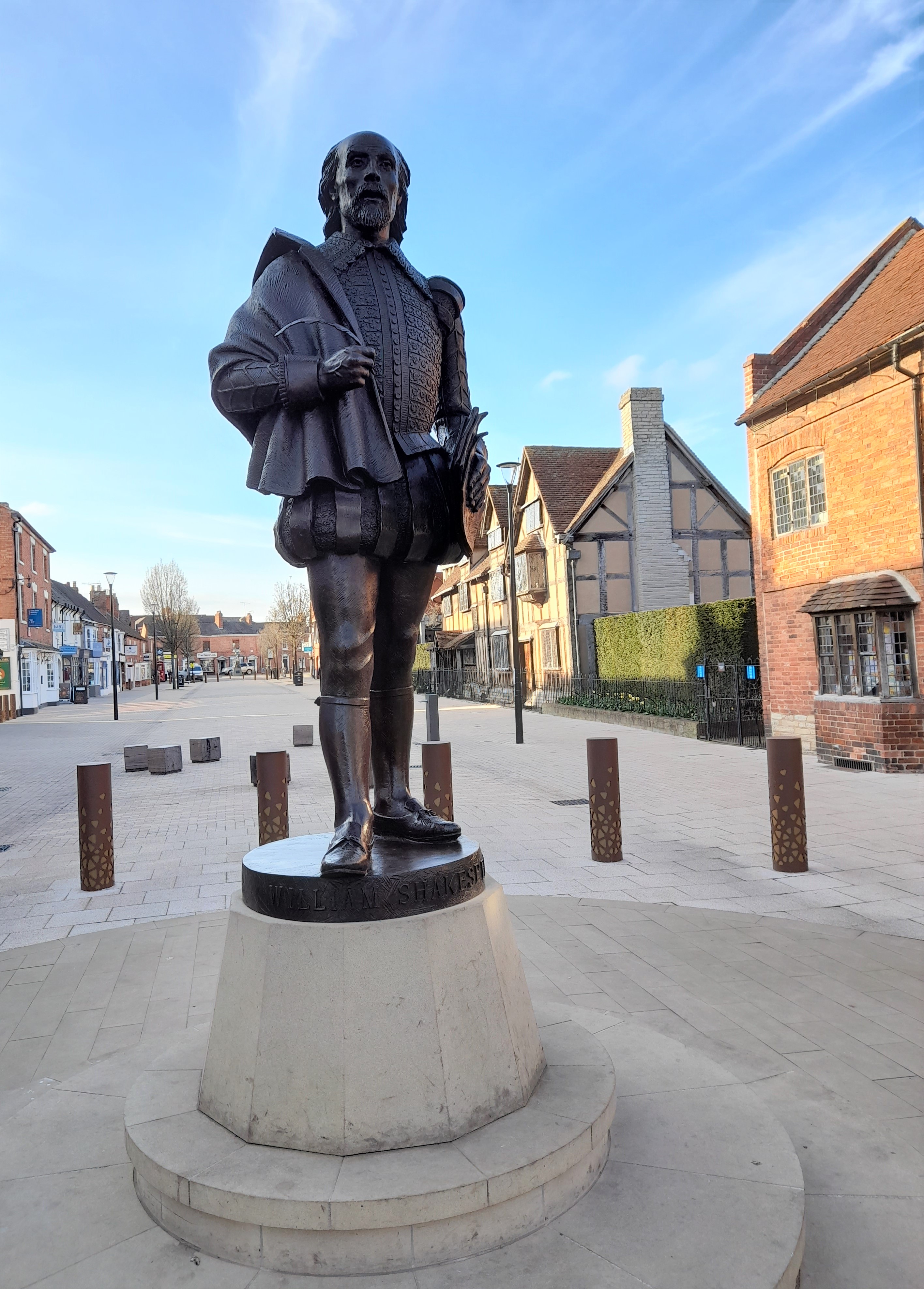 This life-size bronze by James Butler RA was funded by a local businessman and was erected, according to the local paper, in late June 2020. It was a couple of months late, given that originally it had been intended to unveil it as part of the 2020 Birthday celebrations, cancelled owing to the pandemic. Realistic in mode, it cost 100k and is wonderfully conventional, depicting Shakespeare in compulsory puffy trousers, clutching the compulsory quill in one hand, a couple of pieces of parchment in the other, and wearing the sort of harassed expression one well might if trying to compose deathless drama with a quill on loose-leaf with no inkpot to hand while standing outside in the sway and jostle of a crowd of tourists.[i]  Less conventional than all of this, however, is the quotation from The Tempest 5.1 carved as a curl of prose into the stone pavement at his feet: ‘Oh wonder! How many goodly creatures are there here! How beauteous mankind is! O brave new world that has such creatures in’t!’ Miranda’s words are here put into Shakespeare’s mouth, displacing the more usual identification of Shakespeare with Prospero whose dry riposte to his daughter’s remark, ‘’Tis new to thee’, suggests a much more cynical view of the shipwrecked courtiers who have been misbehaving all over the island. Shakespeare-as-Miranda is made into an approving spectator of the global tourists milling through Henley Street – in 2016, with the commemorations of the 400th anniversary of Shakespeare’s death, tourist numbers to the Shakespeare properties were estimated at some 825,000.[ii]  The statue, then, is the latest expression of Stratford-upon-Avon’s ‘glocal’ status – a horrid word, which, however, usefully encapsulates the idea that a locality might paradoxically have global significance.

Over the coming series of blog posts, I am going to be exploring the practice of erecting statues of authors, describing how the practice has evolved, outlining its characteristics and variants, and asking what the function of statues of authors is in creating a sense of place. Shakespeare will inevitably flit in and out of my discussion, because as a ‘world literary giant’, to borrow the name of a square in Shanghai in which a statue of Shakespeare also stands, for rather over 250 years he has been rendered expensively statuesque in nearly all possible aesthetics. I’ll be posing generic questions to a series of statues: How big is the statue? What is it made of? Where is the statue placed? What is the author represented as doing? How does the figure relate to place? Is it made to ‘say’ anything, and if so, how? Above all, what and who is it for?

This entry was posted in Uncategorized and tagged Shakespeare, statues, Stratford-Upon-Avon. Bookmark the permalink.