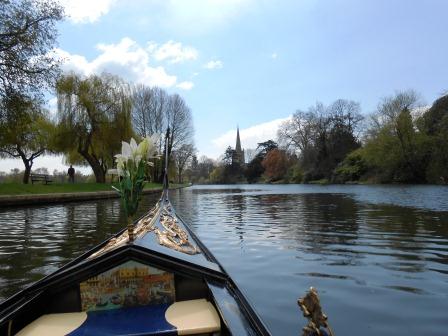 April 27 2013 I’m floating in a jet-black shiny gondola, reclined on black velvet cushions and guarded on both sides by brass horses with curled fish-tails, embellished with black tassels.  Behind me there’s a gondolier in traditional blue and white striped shirt, black trousers and boater; before me rises a knife-like grey metal prow over a deck ornamented with golden cherubs and curlicues and a large vase of fabric lilies – the prow switches gently back and forth as the oar behind me dips into the water and pushes it away with a quiet gurgle below the keel. It’s freezing and about to hail.

This isn’t the Grand Canal in Venice, where I was too cheap-skate last time to hire a gondola when following in the watery and lascivious peregrinations of Byron among the palazzi. No, the river is the Avon, the place is Stratford-upon-Avon, but it is a real Venetian gondola, about half-size, made for some late nineteenth-century exhibition in London, and it’s being propelled not by a Venetian but a gentleman from Oxford, one of the select few in Britain who specialise in rowing standing up. And what is a gondola Shakespeareanly named ‘The Dream’ doing here, swimming exotically between swans and rowing-boats, on a blowy April Saturday? And what am I doing in it? Well, I am, as ever, indulging in literary tourism. It is Marie Corelli Day in Stratford.

And who is or was Marie Corelli? She is Stratford’s other writer, who came to the town at the age of forty-five to recover from an illness, and stayed on to live in ‘dear Shakespeare-land’. Once celebrated as the woman whose novels outsold all previous books, she is now almost entirely forgotten, except in Nigeria. In Nigeria, she is still big, thanks to some publisher who, in the aftermath of the First World War and the consequent almost total collapse of her reputation, had the bright commercial idea of shipping his worthless stock to Africa. Corelli had a great eye for a publicity stunt – hence the entirely bogus Italian name (her name was Minnie McKay) which must have in turn naturally suggested the gondola, complete with a real Venetian gondolier. Mind you, he had to be dismissed six months later for pulling a knife in a brawl in the Dirty Duck pub. Thereafter, she was rowed by her gardener until he was called up and killed in the War. After that sorrow, she never took it out again and it sat in boathouse after boathouse until it was restored many years later.  In her heyday, though, Corelli’s stunt was so much one of the sights of Stratford that there was a (possibly satirical) postcard issued by a local newsagent, showing her drifting along in it, under willows and accompanied by a swan.

There’s another of her house, Mason Croft, now the Shakespeare Institute, where she set up house with her long-time companion and biographer Bertha Vyver. You can still see their initials entwined over the pseudo Elizabethan fireplace in the pseudo-Elizabethan hall with its motto ‘Amor Vincit Omnia’.  She was rich enough and famous enough in 1907 to lay on a private train from Oxford to bring Mark Twain up to stay with her. He was less than grateful. She was celebrated enough to be the inspiration for E.F.Benson’s character Lucia in his ‘Mapp and Lucia’ series of fictions. Corelli’s appetite for the Shakespearean is both lampooned and admired in the Lucia of Riseholme who boasts an especially ‘Elizabethan’ house, complete with a Shakespearean fantasy ‘Perdita’s garden’, and who triumphs as Elizabeth I in the local village pageant. In short, for Edwardians, to borrow the words of a poem by H. Chance Newton of 1902 –

With deep reverence regarding

That Poet who has helped the World’s expansion,

Also (leftward from the station)

At that other Stratford Shrine – Sweet Marie’s Mansion.

Here Corelli displayed herself as a writer – especially in the music room filled with instruments, flowers, caged birds and objets d’art, and, which was, according to Maureen Bell, garnished with ‘books…artfully displayed, left open at particular passages’ and ‘manuscripts – with ink pens carefully laid across them – …placed on desks to catch the eye of visitors’. Her will provided for the preservation of the house as a shrine to her work as a writer. 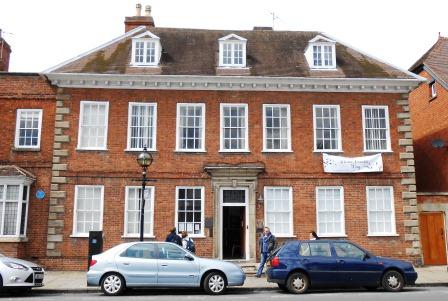 Today, Mason Croft is humming with excited admirers. They have laid on tea and cakes in the conservatory served by maids in Victorian costume, there is an exhibit of books, a silent film, a programme of talks, and a dramatised biographical reading in costume, all of which make up for my disappointment in not being able to ride in Corelli’s carriage because the horse has fallen lame. They are even launching an app, an eerie affair, which allows you to look at locations around Stratford through your phone camera, enhanced with the ghost or ‘aura’ of Corelli lifted from old photographs – a novel take on the sort of emotional experimentation typical of 19C literary tourism which entailed enhancing the scene with imagined figures.

My own interest in Corelli focusses upon her passion for Shakespearean Stratford. To this we owe the interior of Mason Croft, which offers an Edwardian take upon an Elizabethan building, and her famous folly which still stands in the back garden. This little piece of nonsense, an eighteenth-century folly which Corelli thought was Elizabethan, and which she called ‘The watch-tower’, became a deliberate exercise in evoking Shakespearean England, by which one might understand a loose concoction of diamond panes, dark wood, mullion windows, and a general air of having been borrowed from some Edwardian set for Twelfth Night. This is where she wrote, and where I, having obtained the key, sat in last autumn’s chill writing amongst a litter of dead woodlice about the business of making Stratford ‘Shakespearean’. For Stratford has not always looked as ‘Shakespearean’ as it now does – the pervasive black timbers and white plaster are very largely creations of the early twentieth century which stripped back later stucco and brick frontages.

Corelli deserves credit for having argued the necessity to do more than conserve just Shakespeare’s Birthplace, which had been saved for the nation in the 1850s. (For an excellent and detailed study of this, see Julia Thomas, Shakespeare’s Shrine.) This conservation impulse sprang from a strong sense that Shakespeare’s genius could be attributed to Stratford’s ambience. Her often unwelcome and controversial incursions into local politics and planning decisions mean that she still has a reputation as a meddlesome and eccentric middle-aged woman, but her actions were motivated by a strong sense of the desirability of conserving what was called at the time ‘Shakespeare-land’. Her fame meant that she was able to tread on a great many local toes to good effect, being personally responsible for orchestrating campaigns in the national press against the erection of inappropriate monuments near Shakespeare’s in the church, the demolition of Elizabethan cottages in Henley Street, and (the one she lost) the erection of the American fountain in Market Square. She was instrumental in the preservation of Harvard House (the home of the mother of the Harvard who went on to found the university in Boston), the Rother gardens, and the formation of a Guild in 1913 to protect the town’s heritage. In this, she was well ahead of her time – it would take the First World War to convince people generally of the need to save Englishness from the ravages of change – it was only in the 1920s, for example, that there was any concerted action to preserve Jane Austen’s house in Chawton, Johnson’s house in London, or Keats’ in Hampstead.