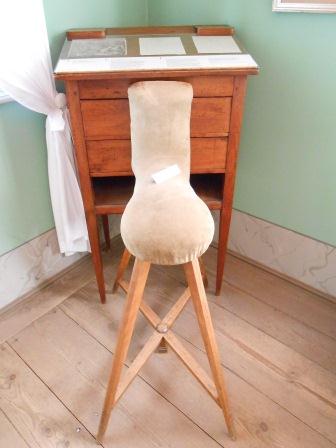 One of Goethe's desks in the Garten haus

Weimar is home to a lot of history, not least the Weimar republic, Hitler, and Buchenwald – but I went to research happier times, the so-called ‘Goethe-zeit’ when Goethe, having single-handedly dreamt up German romanticism with his novel The Sorrows of Young Werther (1774), and having recovered from a sort of nervous breakdown by taking a sabbatical journey to Italy, returned and invented anti-Napoleonic Weimar classicism. Here the big founding four of German national literature were convened within a blue-stocking, courtly, proto-university. Here Herder, Wieland, Goethe and Schiller sparked off each other, not to mention, in their turn, Nietzsche, Andersen, and Pushkin. It is, in short, a town where a great deal of writing has been done, and it therefore contains a remarkable collection of celebrated writers’ desks.

But what is a writer’s desk, or rather, what does a desk mean? We might try out the proposition that a writer’s desk makes a series of statements about the act of creative writing, and especially the acts of creative writing carried out by that particular author. It’s worth saying here that there are writers whose desks are almost not desks at all.  I’ve already in this blog mused a little on the proposition that Austen’s desk makes about genteel, amateur, female literary work. Similarly, Charlotte Brontë did not have what we could nowadays call a desk at all, but instead a portable writing-desk (now held at the British Library) which reputedly she carried out to a particular flat stone by a stream on the moors above Haworth, where she drafted Jane Eyre. A stone as a desk – it is appropriate both to her outsider status as a woman author, and to the mythology of the moors that has come to surround the Bronte sisters’ literary output. This desklessness, simultaneously real and ideological, is not confined to women authors but extends to certain male poets as well. Here Burns is of especial interest. As a civil servant (an excise man) he had a number of desks, and such was his celebrity shortly after his death that many of them were preserved and are now scattered between the Burns properties in Alloway and Dumfries, and the Writers’ Museum in Edinburgh, and for all I know to the contrary, in private collections as well. But the idea of the ploughman poet making up songs on the braes o’ Doon did not and does not sit very easily with the middle-class grind of the desk. A few years back, Burns’ desk was redisplayed in the Birthplace slightly tilted up, as though flying away, and all the papers on it were cunningly displayed on invisible wires as though caught by a great gust of wind.  Burns, that particular display said, may have worked at a desk in a particular place, but he wrote in a Caledonian gale of inspiration. The desk may be said to be ideologically embarrassing to the idea of Burns; writing lyric poetry is effusion or dream, not clerical work. Indeed, arguably the most powerful invocation of Burns in the act of writing is not with pen and paper at all, but with a diamond ring on the glass pane of a pub window. This seems truer to our sense of him as a poet who overwrites location.

One of the effects of the advent of the word-processing computer is that the idea of the act of writing has changed utterly. Firstly, the act of writing has become imaginatively less organic. There is an imaginative world of difference between the idea of a living hand curled around a living quill-pen and the idea of fingers tapping a standardised mechanical keyboard, whether typewriter or computer. The transmission of ideas through the body onto paper has become measurably more alienated.  On the other hand, writing for publication – the business of making notes, drafting, redrafting, the making of manuscript ‘fair copies’, copy-editing, and proof-reading – has arguably become more ‘magical’, because more invisible. Wordsworth, for example, composed first in his head, then in scribbled-down sections, and then he got his womenfolk to make fair copies for the press. You can still see the first proofs from the printer for Balzac’s Comédie Humaine laid out on his desk in Paris, covered not just with handwritten corrections but with extensive rewriting before going to second proof stage. If the archival material survives, as in the case of Shelley’s ‘Ode to the West Wind’, it is often possible to track poems in detail from initial conception, through subsequent revision. Although the moment of inspiration is invisible, its realization is not. All of this is disappearing from cultural ordinariness. By comparison, the transition from blank page to finished product is almost eerily instantaneous with a computer – a computer turns an author into a reader at the exact moment of writing. Tracking the process of drafting and redrafting has become much more difficult, although the British Library now archives writers’ old computers, with post-it notes still stuck on their shells, and are working on how to archive the changes hidden deep within the machine. This modern scene of writing throws into strong relief a conventional idea of the writer at his desk, which we almost certainly owe to Victorian cults surrounding Walter Scott and Charles Dickens, of which more in a later blog. For now, though, we might say that the dominant cultural trope imagines a professional author as seated at a desk piled with papers and books, working with a pen, by artificial light. That trope is both invoked and challenged by the desks on display in Weimar.

In Goethe’s so-called ‘Garten-house’, where he lived as a young writer and which he kept as a retreat for the rest of his life, there are three desks on view. Somehow a writer should not have three desks – we want one privileged locus of work. Worse, two of them immediately and strongly disrupt our twenty-first century idea of the writer at his desk, for they are designed for standing or near-standing rather than sitting. This was not as unusual as you might think. Goethe’s view was that sitting was bad for the digestion (probably true); perhaps this was what impelled Victor Hugo to build a similar standing desk in his house in Guernsey.  Moreover, Goethe seems to have preferred to write not with a quill (which scratched and interrupted his flow of thought because of the necessity of frequently dipping it into the inkwell) but in pencil. Nor (at any rate in later years, when he was living in the much bigger house up the hill in Weimar) was he alone. Instead, in this dedicated study, he typically dictated to an amanuensis and copyist while walking round and round the table.

This last practice reinstates the ‘romanticness’ of writing. It separates inspiration from the mere labour of writing – here writing really is just copying down. Schiller’s desk also displays romantic inspiration, but by describing its absence. It displays a facsimile of the last half of his last, unfinished play, laid out on its surface.  Here the manuscript speaks not so much of the labour of writing but of the tragic cessation of writerly imagination. Right next to the desk is Schiller’s bed, adumbrating the pathos of his early death.

The solidity of these desks, houses, and the romantic stories of writing attached to them rather belie what actually happened. Writers write elsewhere as often as they write at home, especially if they can get a free or cheap meal and escape domestic demands (think of J.K.Rowling). Iphigenia auf Tauris and Maria Stuart were actually written at the Duchess Anna Amalia’s summer retreat a few miles away. Goethe seems through much of his life to have written on the run, in notebooks, on travelling writing-desks, even on old theatre tickets stuffed in his pockets. But the writer’s desk remains a privileged locus, evidencing in an uneasy blend the idea of writing as located, magical, timeless inspiration, and writing as a sort of physical slog that takes a good long time.