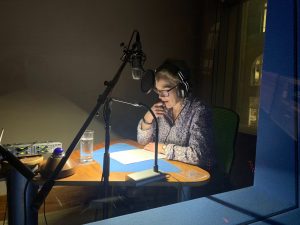 Naomi Barker in the recording studio

This week Naomi Barker interviewed award-winning South African composer and pianist Rashid Lanie about his work as a pianist, song writer and film music composer. The recording will be a resource for our new level 1 module A111 ‘Discovering the arts and humanities’. Block 3 of the module explores the theme of ‘crossing boundaries’ and includes a group of chapters on Sophocles’ Antigone, the South African play The Island by Fugard, Ntshona and Kani and protest music in South Africa. In addition to the interview with Rashid, students will be able to hear actor Mark Springer talking about performing in The Island and translator and director David Stuttard talking about his work on Antigone.

Rashid spoke eloquently about how, under the apartheid regime, music gave a voice to the politically disenfranchised black people of South Africa. He recounted how careful he had had to be in performing under the watchful eye of the police, especially music with words that might be deemed subversive. In that environment though, music was incredibly powerful in bringing people together and breaking down the barriers. Rashid also spoke about his work as a composer and in particular about his involvement in writing the song ‘The people want Mandela/Bafana Mandela’ – a collaboration with Ray Phiri, Jennifer Ferguson and Victor Ntoni. As a film composer, in writing the music for ‘Kalushi’ a film about the anti-apartheid activist Solomon Mahlangu, Rashid was musically able to tell his own story as he too had experienced being imprisoned as a student.

You can find out more about Rashid and listen to samples of his music on his website.

‘Discovering the arts and humanities’ starts in October 2019 and registration opens on 21 March. Find out more here here. You can also find out more about studying music at the Open University here