I first visited the small town of Kanniyakumari in the South Indian state of Tamil Nadu in 2006. The town is named after Kanya Kumari, the ‘virgin goddess’ who is a representation of the Great Goddess, to whom the town’s most well-known temple is dedicated. Evidence of Kanniyakumari as a centre of Hindu pilgrimage, especially for devotees of the Devi (Goddess), stretches back well over a millennium.

The meeting of three seas off its shore is believed to add further to Kanniyakumari’s sanctity. Fringed by steep conical hills and bounded on the southernmost tip of India’s mainland by the Bay of Bengal, the Indian Ocean, and the Arabian Sea, it is a place of great natural beauty.

Its striking seascape is renowned for its spectacular sunrises. One can readily understand why Kanniyakumari is sometimes referred to in guidebooks as India’s ‘Land’s End’.

As you might expect, evidence of Kanniyakumari’s Hindu heritage is ever-present, not least in the temples and shrines dotted around the town. It has a small Muslim community. Like some other areas in the southern states of Tamil Nadu and Kerala, Kanniyakumari’s population also contains a far higher proportion of Christians than the national average of just over 2%. The presence of Christianity is dramatically visible, especially when the town is viewed from the sea. 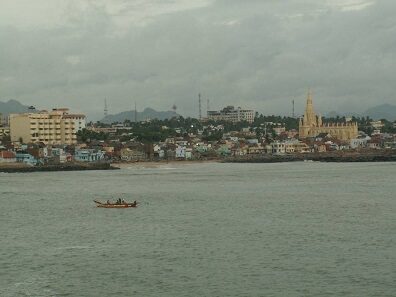 Our Lady of Ransom Church, Kanniyakumari

At the time of my first visit to Kannikyakumari, I was working on popular, devotional pictures of Swami Vivekananda (1863-1902), one of the most influential Hindu gurus of recent times. It is said to have been at Kanniyakumari in late 1892 that Vivekananda determined the course of his future career. In 1970, the Swami Vivekananda Rock Memorial was inaugurated in celebration of the centenary of Vivekananda’s birth. The Memorial stands on a cluster of rocks some 500m off the shore at Kanniyakumari.  The particular rock on which it was built is popularly held to be sacred because an indentation in the rock is believed to be the footprint of Kanya Kumari, a conviction that underlies the long-standing belief in the goddess’ intimate connection to the town and India’s southern boundary. I had spent time in South India at what was then still Madras, now Chennai, in the early nineteen-eighties but had not travelled as far south as Kanniyakumari. So, determined to see this iconic monument and gather examples of the popular, devotional art it had inspired, I set off from Kolkata on the not inconsiderable journey to the far south of India, by flight to Chennai and then by overnight train to Kanniyakumari.

Perhaps it was because I was born and raised in a British seaside resort at the end of a railway line, with nothing beyond but the sea, that I felt an almost immediate sense of affinity for Kanniyakumari. I say ‘almost’ because my first visit nearly turned into a disaster. My agent in the UK, as I discovered in Chennai when already irreversibly  on my way, had made an error when booking my return flight to Kolkata (ensuring I would miss my flight back from there to the UK), the weather was unseasonably poor, and my camera played up: all in all, a researcher’s nightmare! It was during this visit, however, that I became fascinated by the organisation that manages the Rock Memorial, the Vivekananda Kendra. This was enough to draw me back to Kanniyakumari a few years later. I have been returning ever since to continue my research into how Swami Vivekananda’s legacy has been interpreted by the Vivekananda Kendra, and the effect of the creation of the Rock Memorial on the town.

When India began to develop its tourism industry in the 1970s, Kanniyakumari, which formerly had been largely reliant on fishing and pilgrims for its income, rapidly turned into a tourist resort. Although the annual number of visitors to Kanniyakumari is steadily increasing, it is a little bit off the well-beaten tourist track in neighbouring Kerala and retains the feel of a small town. One factor in explaining the increasing number of visitors is that, since 1970, Kanniyakumari has become more widely known as the location of the Vivekananda Rock Memorial, which, lying off-shore, requires a short ferry ride to reach it, adding to the experience of making the excursion.

In fact, the Rock Memorial is one of a number of monuments erected in Kanniyakumari in the post-Independence era, including one to commemorate Mahatma Gandhi, a statue of a legendary Tamil poet, Tiruvalluvar, and more recently a memorial in honour of the many who lost their lives in Kanniyakumari as a result of the 2004 tsunami. The image of the Rock Memorial and the Tiruvalluvar statue, built on the adjacent rock some years later, is invariably used to promote the town. 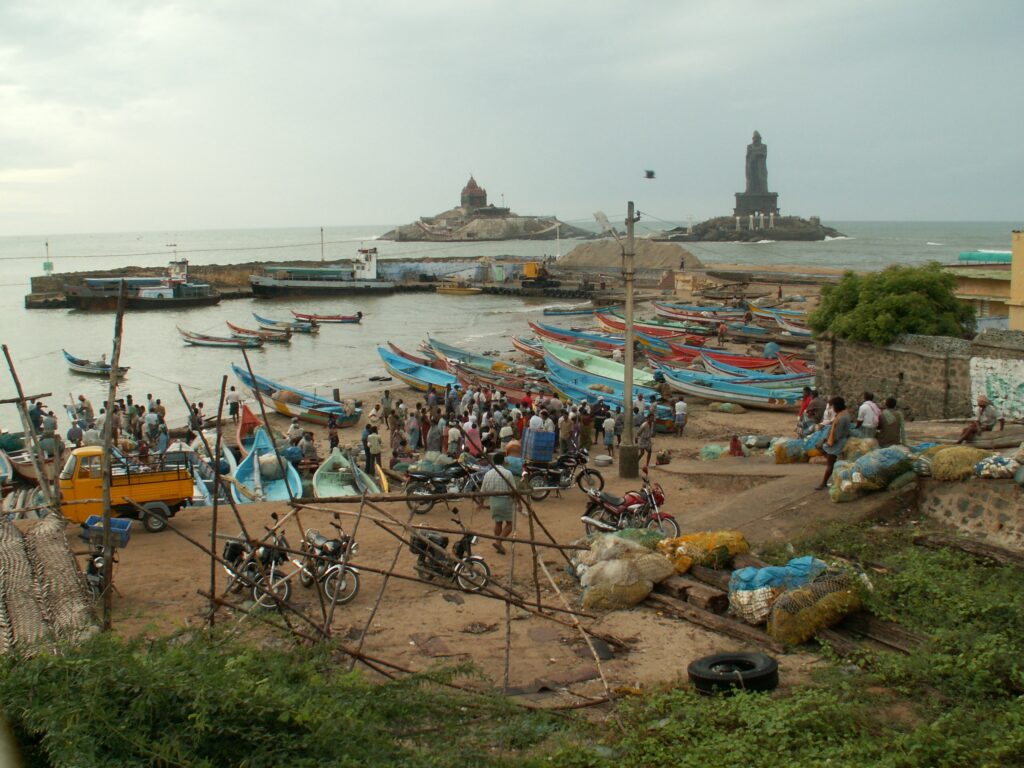 A further attraction is the extensive HQ of the Vivekananda Kendra, which, in addition to organising services in areas such as education and sustainable development, maintains permanent exhibitions and celebrates several Hindu festivals during the year.

The climax of the ritual worship of Mahaganapati in September 2018 at the Vivekananda Kendra’s HQ, which shows Mahaganapati’s banner being raised on the temple’s symbolic flagpole. (Mahaganapati is the form of the deity, also popularly known as Ganesha, as the Supreme Being.)

Having seen the large numbers of those visiting the Rock Memorial during my own visits over more than a decade, I found myself wondering about the reciprocal relationship between the promotion of Kanniyakumari as a tourist resort and the increasing popularity of the Rock Memorial as a destination for Vivekananda’s devotees and admirers, and for other tourists both domestic and international. Would the Memorial be as much visited as it is now, if its establishment had not coincided with the promotion of India’s tourism industry and consequently of Kanniyakumari as a resort? Would Kanniyakumari have less appeal today as a destination for visitors, had the Rock Memorial not been built there?

The numbers of those enthusiastically taking a visual record of their visit to the Rock Memorial has reminded me of how difficult it is in an age of mass-tourism and rapid transport, as many scholars have noted, to disentangle ‘pilgrimage’ from ‘tourism’.

It easy to find references on the internet to the Memorial as a ‘sacred place’ and to those visiting it as ‘pilgrims’. Yet, what they are visiting is a monument to a Hindu guru and not a temple or a samadhi, a memorial marking the cremation site or tomb of a holy person.  What is in the minds of those who stand before Vivekananda’s statue? Is the Rock Memorial a new kind of pilgrimage destination?

Responding to the last question is further complicated by the fact that the Vivekananda Kendra, the organisation that manages the Memorial, readily identifies itself with the ideology of Hindu nationalism, which it regards as an extension of Vivekananda’s mission. (Other devotees and admirers of Vivekananda would strongly contest this claim.) Although the Kendra maintains that it is a spiritual rather than political movement, a significant number of visitors drawn to the Memorial have undoubtedly viewed Vivekananda through the lens of political positions sympathetic to the ideology of Hindu nationalism in which Vivekananda is represented as something of a proto-Hindu nationalist.

It is a good thing that Religious Studies has been a multi-disciplinary enterprise since its inception and is even more so today, given the many layers of complex and inter-related questions a location such as the Rock Memorial raises when one starts to look at it more closely. By drawing on other scholarly disciplines, one can frame and pursue questions that might appear to some to lie beyond the scope of a more narrowly conceived study of ‘religion’. The latest phase of my research centred on Kanniyakumari, for example, has involved applying insights from Heritage and Tourism Studies in order to understand the ‘intangible heritage’ embodied in the Rock Memorial and the way in which the legacy of a nineteenth-century guru has been re-interpreted by later devotees and admirers, and then disseminated by tourism in the period since the nineteen-seventies. But, perhaps my research has been enriched above all by how much time I have spent at this iconic location when I have been able to visit it with different people at different times and to share their pleasure in seeing this monument for themselves.