Religion is an area of great contention. Media – both ‘social’ or traditional – seeks to gain attention by tantalising lines which inflame our passions and tug on our heartstrings. What better for the media to grab our attention, than by drawing attention some of the most deeply felt aspects of our identity and sense of connection with others. Yet identification with traditional, institutionalised religion is fading from public declarations of identity in Britain (see our new OpenLearn course Census Stories for more on this).

As we grapple with how we fit together as a society – what are our shared values and connective rituals? – beliefs continue to grab headlines, drive our behaviour and spark our anxieties.  On a global scale, religious identity continues to be an important element of facing shared global challenges of climate change, migration, and the growing inequalities in health and wealth.  The scale of these challenges means that accurate and sensitive discussions of religion – the beliefs and practices which shape our values and sense of identity – is as important and relevant as ever.

The vision for this project came from the realisation that there is a lot of excellent, but largely under-coordinated and under-resourced work seeking to improve the public discussions around a critical religious literacy. Improving public understanding about the nature of religion and belief, as well as ensuring information about these human practices is accurately conveyed in public discourse, needs a multi-pronged approach. Transforming public understandings requires greater coordination between school-level teachers of Religious Education, university-level educators in the Study of Religion, the media, civil servants and policy makers. 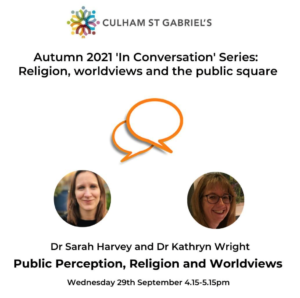 In the summer of 2020, the Open University’s Religious Studies Department and Inform held a virtual roundtable to solidify networks between the many passionate and committed actors trying to improve public understandings about religion and how it needs to be considered in communications for facing many social challenges involving health, security and education.  The Faith and Belief Form shared its specific expertise in promoting community cohesion and promoting strong, productive and positive relations between people of different faiths and no-faith. Also in attendance was the CEO of Culham St Gabriel’s charity; Culham was in the process of strengthening its strategic commitment to promoting the Religious Education Council’s report on Religion and Worldviews (2018). Together with Inform’s commitment to promoting accurate information about minority religions and agile social scientific research team, and the Open University’s commitment to educating wider publics through its unique nationwide, online platforms – the Religion and Worldviews project was collaboratively initiated.

We are almost half-way into this project now. The first output was a ‘Baseline Report’ which provides an overview of the existing reports relative to both Religious Education (RE) and to the perception of religion in public life more generally.  This report has raised a number of key questions about public perceptions of the Study of Religion as a subject. Meanwhile primary research by Inform on perceptions of religious education at British schools by current University Students as well as an independent general population survey commissioned by Culham’s in the summer of 2021, provides valuable evidence that many people find much of value in school-level Religious Education. 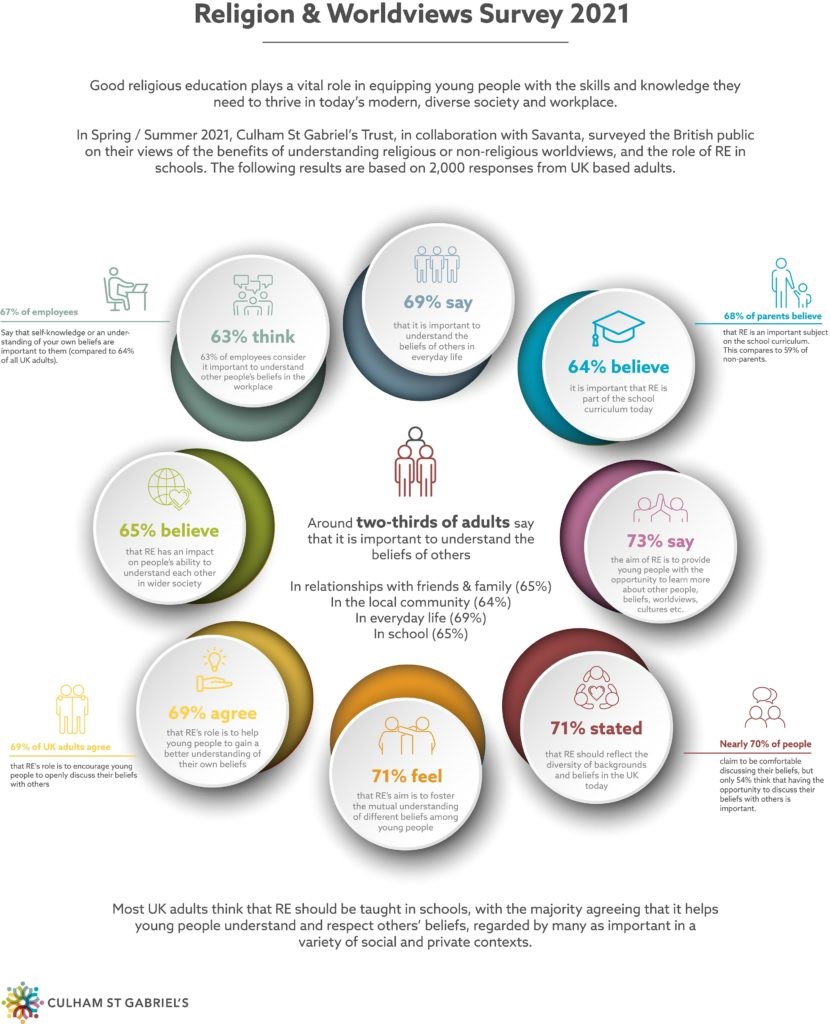 We are in the middle of the project and are currently seeking to better understand to what extent Religion and Worldviews proposal might be able to provide a coherent way forward for religious education at school level in England – and what the barriers are toward finding consensus around a more shared vision of the study of religion in schools. This autumn, led by the Faith and Belief Forum, the project is holding a number of focus groups with community groups, SACRES, educational leaders, parents and those who have influence on educational policy to try to determine the barriers to implementing a more vibrant and coherent approach to religious education that is fit for purpose in our contemporary world. The eventual outputs of the project will be a series of resources to help school leaders, civil servants, parents and others ‘outside the classroom’ better articulate a coherent vision of Religion and Worldviews as a way forward for best addressing the variety of competing needs around religious education at this time.  Our Resources Packs should be ready in the summer of 2022.

With the diverse competing interests of religious and secular beliefs and practices, it is hard to achieve consensus on a shared coherent vision for religious education. Yet the need is great. Religious and non-religious beliefs will continue to inform the frameworks of public debate as we move to face the shared global challenges of coping with inequalities of wealth and health as well as the effects of climate change.

It is hoped that this project will help coalesce a better consensus around Religion and Worldviews as being a container which can move largely shared agendas forward. Religious actors as well as university and school-level educators passionately believe in the importance of accurate and sensitive understandings of religious and secular worldviews being presented in public discourse. Alongside other partners, this project hopes to drive this broadly shared agenda forward.