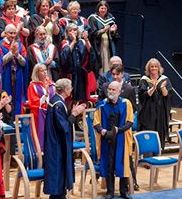 Terry Pratchett, creator of the Discworld and co-creator of the Long Earth died at home on Thursday 12th March 2015, aged 66. His award winning books and talks have amused and inspired many. They have also sometimes provoked new thoughts and even awed or humbled us. How do you tell people that you are dying, slowly as parts of you fail? Terry Pratchett, inspired by Richard Dimbleby’s taboo-breaking announcement of his struggle against cancer, told the world. His support for dementia research was more than financial – although he was more than generous financially too. His efforts were of a piece with the kind of thing his Discworld characters would do: naming a demon as a first step in slaying it. Terry was also a vociferous supporter of the right to live and die with dignity. He insisted that being able to chose when to die was a matter of decency and respect for life.

In 2013 the Open University honoured Terry Pratchett with an honorary doctorate for Public Services, particularly in relation to his support for dementia research. Terry honoured the Open University by accepting this and received not one but three standing ovations at that degree award ceremony. He might equally have been offered an honorary degree for his services to literature. Perhaps his contributions to the study of religions are less commonly celebrated. So, assuming that colleagues in Health and Social Care and/or in Creative Writing might be offering their thoughts on Terry Pratchett’s legacy, I will say a few things about Pratchett as scholar of religion or, at least, about my favourite Pratchett quotes.

Terry Pratchett’s many books are replete with cosmological speculation. They are entirely about playful, sometimes satirical but always wise experimentation with what it means to be human. Or, if not human, at least alive. Or dead. In the first Discworld novel, The Colour of Magic (1983) we met Death. For fans, naming favourite characters can be difficult as Death competes with witches, wizards, deities, trolls, “the lords and ladies”, trolls, heroes, the night watch and the many other sentient inhabitants of a vibrant world. The acts of many of these characters resonate with religious themes, albeit that some came from odd folklores and alternative spiritualities. In writing about Paganism I was privileged to be given permission to use quotes from Discworld books at the head of each chapter. Some of these are simply (?) funny. In The Light Fantastic (1986), Pratchett wrote that

‘Like Druids everywhere they believed in the essential unity of all life, the healing power of plants, the natural rhythm of the seasons and the burning alive of anyone who didn’t approach all this is in the right frame of mind.’

Others deserve considerable reflection. Consider this:

‘One of the recurring philosophical questions is: ‘Does a falling tree in the forest make a sound when there is no- one to hear?’ Which says something about the nature of philosophers, because there is always someone in a forest. In may only be a badger, wondering what that cracking noise was…”’ (from Small Gods, 1992).

In the worlds Pratchett inhabited (the Discworld, the Long Earth and this curious planet that is our home), “there is always someone”. This seems to me as good a summary as you could desire for religion, philosophy, ecology, and much else besides.

‘“Ah well, life goes on,” people say when someone dies. But from the point of view of the person who has just died, it doesn’t. It’s the universe that goes on. Just as the deceased was getting the hang of everything it’s all whisked away, by illness or accident or, in one case, a cucumber’. (from The Last Hero, 2001).