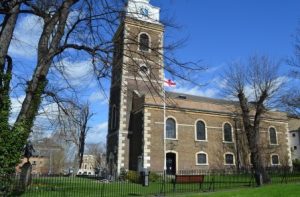 On 21 March 1617 a 22 year old woman, Lady Rebecca Rolfe, previously known as Pocahontas, was buried in St George’s church in Gravesend. On the 400th anniversary, 21 March 2017, a procession and church service commemorated her death and celebrated her alleged legacy. I was there as a scholar interested in observing the varied representations of Indigenous peoples and also their relationships with colonialism. Pocahontas / Rebecca Rolfe, provides a fascinating case study. 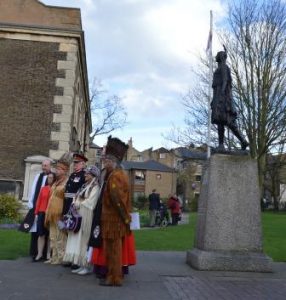 During the memorial procession and church service in Gravesend, no-one appeared to be dressed up as a little Princess Pocahontas. Groups of school children participated in the procession from a park beside the river Thames to the “Pocahontas Gardens” surrounding St George’s church. Many carried banners in the shape of feathers, but none of them wore feathers. The only feathered costumes in evidence were the one on the statue of Pocahontas in the church gardens and those worn by representatives of several Virginia Indian tribes who offered greetings during the church service. Visually, Pocahontas as romantic Indian was less in evidence than images of Lady Rolfe as aristocrat. 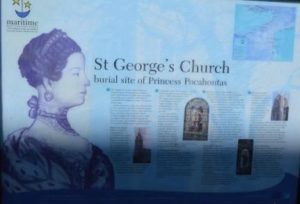 In speeches during the procession through the town and during the church service, Pocahontas was regularly called “Princess”, presumably because she was daughter of the Paramount Chief of the Powhatan Confederacy. Less often she was called “Lady Rolfe” or “Rebecca Rolfe”, recognising her status as wife of an aristocratic colonist and member of the Court of King James. She was represented as a loving Christian wife and mother, as an exemplar of Christian faith and as a peace-maker. She was celebrated as the “first fruits of Virginian conversion”, one who demonstrated the success of what Christians claimed was the civilising mission of colonialism. 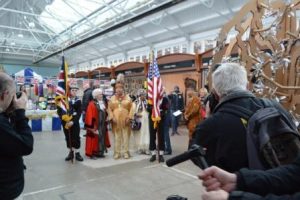 The dominant theme of the commemoration was that Pocahontas provides an example of a peace-making and reconciliation both during her life and down the centuries. It was never made clear how she did this in her lifetime. Possibly this was an allusion to her alleged saving of Captain Smith’s life or to her use as a hostage by Captain Argall in order gain the release of English settlers. Two other relationships were emphasised throughout the day. The first of these was between England and Virginia (and sometimes between the UK and USA). The procession was led by bearers of the flags of the UK and USA, and continuously referred to guests from the State of Virginia. The second emphasised relationship was between Christianity and colonialism. Although the Bishop of Rochester’s sermon briefly noted the “difficulty for some” of talking about colonialism, the 400th anniversary of the death of Pocahontas was largely a celebration of an English colony. At a time when many North American Christian denominations are announcing their rejection of the Doctrine of Christian Discovery (the foundational European justification for invasion and dispossession), it was unsettling to witness a ceremony in which even the representatives of Indigenous tribes celebrated the Virginia colonies as divinely mandated expansions of peace. 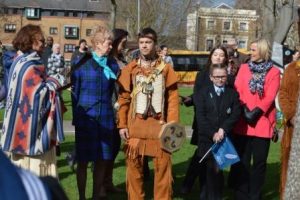 Much of this is summed up in one curious juxtaposition in the Pocahontas Gardens: a young man (not one of the Chiefs) sang out the names of Virginia’s Indigenous nations while standing next to the school girls who had sung the national anthems of the UK and USA at the beginning of the procession. Whoever Pocahontas was in life, remembrance of her appears to be deeply confused.