On June 24th, 1947 – seventy years ago on Saturday – Kenneth Arnold was flying his small Cessna over Washington’s Cascade Mountains when saw something odd in the sky. What looked like nine silver crescents could be seen flying in formation at a height and speed the pilot and Deputy Sheriff knew were then impossible. They seemed to move with an odd bobbing movement, which Arnold would later describe as “like a saucer skipping across water” when he reported the sighting. But the phrase was misunderstood by the local press, and soon people all over the US were seeing “flying saucers”. The Roswell Incident, now probably the most famous UFO story, even more so than Arnold’s epoch-making sighting, was reported on July 7th, only thirteen days later. 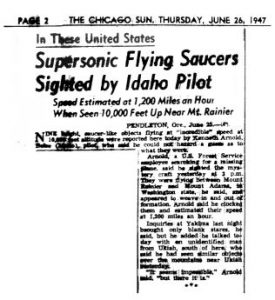 Thus was born the most lasting and influential new mythology of the modern age.

The UFO narrative has been prominent in the development of new religions since then. Some new religions made UFOs central to their beliefs, such as the Raelians or Heaven’s Gate. In many other cases, UFOs were adopted into already-developed theologies, like in the Nation of Islam. Less obvious, though arguably more influential, was the role they played in late Theosophical thought. Not only were the majority of early contactees Theosophists, but they played a large role in the development of the Findhorn Foundation, and thus the development of the New Age. But here, I want to suggest a couple of more fundamental reasons why UFOs are important for the Study of contemporary religion in historical context.

Firstly, the UFO narrative shows how supernatural narrative elements can be reproduced in and adapted to fit any context. In this case, the most interesting part of all is the way that it takes on the technological garb of the Space Age and the political ramifications of the Cold War, and mixes them together into a recognisably mythological narrative with such power that 70 years later it continues to develop and complexify. Carl Jung, calling them “technological Angels”, thought they were like myths because came they from our subconscious; Jacques Vallée flipped this and said that ancient myths were UFOs, but we didn’t have the technological language to describe them properly. 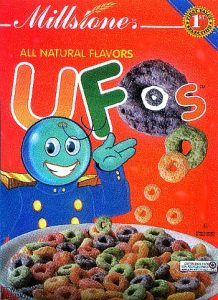 It is likely the case that practically every child in the street knows what a UFO or grey alien looks like – perhaps even more so than they know the more familiar religious ideas. The image of the grey alien has spread so ubiquitously through culture to appear on cereal boxes and kids cartoons, as well as various new religions, without any institutions, formal doctrines or practises. This leads to the second point. The historian rarely gets to see a narrative of this type as it develops. Compared to the origin stories of Christianity or Islam or almost any other religion, the UFO narrative is well documented and its development can be charted quite clearly. Yet there may be illuminating parallels: 70 years after Jesus’ death, Matthew and Luke were just written, new elaborations on claims of inexplicable sightings, now a generation removed from eyewitnesses.

For anyone interested in the way the story develops over time, I’d recommend Saler, Ziegler and Moore’s book, UFO Crash at Roswell (Smithsonian Press, 1997), which has a high level of detail yet remains readable as it recounts how the Roswell story became codified and developed over the last 70 years. Benson Saler also includes a chapter which considers the ramifications of the UFO narrative in the Roswell narrative in particular for students of religion. My own book, UFOs, Conspiracy Theories and the New Age (Bloomsbury, 2016) looks at the influence of UFOs on the development of the New Age, and later, conspiracy theory culture. But that’s for another post.