Paul Jackson – one of our recent Open University PhD graduates – writes from Provence with exciting news of his forthcoming translations of Alexandre Dumas’ work. Thanks for keeping in touch, Paul! 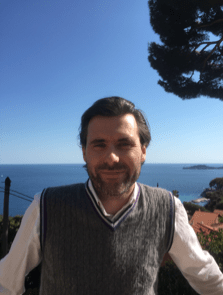 For the best part of five years I was juggling my day job as head of classics, a second master’s degree in teaching and learning in which I was investigating active learning in the Latin classroom, and a PhD on the theology of the Epicureans under the supervision of Dr Naoko Yamagata and Professor Sophie-Grace Chappell. With the master’s degree completed, my thesis was then examined by Professor Tim Whitmarsh and Dr Carolyn Price on 21 May 2015 and was passed without any corrections. The day after I handed in my notice at work, and when the term ended I followed my heart and took myself off to Provence, and there have been ever since.

Here I have been teaching literature, stuff like Sophocles’ Oedipus Rex, Shakespeare’s Julius Caesar, and Marlowe’s Doctor Faustus, and I am also an associate member of Le Centre Transdisciplinaire d’Épistémologie de la Littérature et des Arts vivants at the Université Nice-Sofia-Antipolis. Alongside this I have been publishing parts of my thesis, travel diaries, and translations of French poetry, and in 2018 a little collection of some of my own pastoral poetry was launched over here in Valbonne. However throughout all of this I have been engaged in a much bigger project, a project that first occurred to me during my PhD.

The project, I suppose, is one of classical reception, and more specifically the reception of the classical world in French literature, in particular in the works of that great feuilletoniste Alexandre Dumas, père. Now I have been an aficionado of his since reading his stories of high adventure like Captain Pamphile and The Corsican Brothers as a child, but especially so when, as a classics scholar, I learnt of his historical writings and his novels set in antiquity, works which have yet to be rendered into English despite the enduring popularity of the author beyond the borders of France, being one of the most widely read of French authors whose books have been translated into many languages and adapted for film, television, theatre, and opera on numerous occasions.

So it is then that I am engaged in producing a new series of English editions of these works through Noumena Press, in the hope of revealing a perhaps hitherto unknown side of Dumas to the English-speaking world, a perhaps more erudite side, and of showcasing the enormous range and sheer genius of Alexandre Dumas, père, who wrote some 650 books and 100,000 pages but who is of course associated more with those swashbuckling Napoleonic epics like The Count of Monte Cristo and The Three Musketeers than anything else.

The first of these editions will be published this year in 2019, namely Isaac Laquedem: A Tale of the Wandering Jew. This sweeping, sprawling epic remains largely unknown beyond the borders of France, and curiously so, because the author himself, having spent over two decades on it, claimed that this, not The Count of Monte Cristo or The Three Musketeers, was his magnum opus, and he truly thought that it would one day be recognised as a classic alongside the likes of the Iliad, Odyssey, and Aeneid! And it was indeed a hugely ambitious, and it must also be said controversial, undertaking, for in it Dumas attempts to tell, through the eyes of his Wandering Jew, the whole history of the world! It is then an epic on the grandest of scales, with Odyssean voyages and Virgilean descents down into the Underworld thrown in there and with huge philosophical and theological questions being posed throughout. It is deeply rooted in antiquity and the author draws from an unusually large pool of sources even for him, from Apuleius’ Golden Ass, Pausanias’ Description of Greece, Herodotus’ Histories, Aeschylus’ Prometheus Bound, and Philostratus’ Life of Apollonius of Tyana, for instance. I should perhaps also add that, unlike The Three Musketeers and The Count of Monte Cristo, both of which Dumas’ chief collaborator Auguste Maquet had a big hand in, it can be safely said that Isaac Laquedem represents Dumas unassisted, for the manuscript, all in Dumas’ own handwriting, was later presented by his son to the town of his birth, Villers-Cotterêts. Isaac Laquedem, this historical work set in antiquity, is then perhaps a better example of the ‘real’ Dumas than those other two.

Further information about this edition and indeed the series will be published on my website, http://paultmjackson.com, as well as on my social media pages, links to which can also be found on the website.

I hope that you enjoy discovering the classical Dumas as much as I have!

All the best for now,