Sian Beavers is a first year PhD student researching depictions of antiquity in film, TV and videogames and the potential there is for informally learning about classics through these media forms.  The following blog post explains some of her reasoning for this research in relation to her pilot study that is currently underway.

“Often representations of Classical content seen in popular culture (such as film, TV or video games) are considered not to be “proper” Classics – inaccurate, ahistorical, and in some cases – downright silly.  But it is probably fair to say that the reason many of us study Classics, in one way or another, is due at least in part to a pop culture product that influenced us previously.

Whether it was the highly regarded 1976 TV series, I Claudius, based on Robert Grave’s book of the same name; a children’s adaptation of The Odyssey; the video games Age of Empires or Age of Mythology; or the film widely credited with reinvigorating the ‘sword and sandal’ epic, Gladiator: by now hopefully few can doubt the impact that historical representations in popular culture have on our interest, perceptions and understandings of the ancient world. 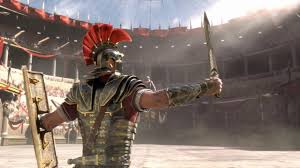 In the modern world, these re-workings of ancient content and material must also be considered re-mediations, in that they not only reference ancient sources but also borrow tropes (in story/content decisions as well as aesthetic representations) from other media. For example, the arena scenes that were so iconic in the film Gladiator are now familiar to us precisely because they have been reproduced in an array of other media with similar content: the TV Series Spartacus; HBO’s Rome; as well as the videogames Ryse: Son of Rome and Spartan: Total Warrior, amongst many other film, TV and videogame adaptations. This trope has become something that we expect to see when we engage with media that represents ancient Rome.

Some may question my inclusion of videogames as a legitimate media form for representing the past, but when one considers that Ryse: Son of Rome, a launch title for the Xbox One sold in 2014 alone more than 5 million copies and the Assassin’s Creed franchise more than 73 million, we cannot deny the popularity and wide-spread effects of the historical videogame genre, or more so that videogames are a new historical form that have the ability to portray a history, even if the history can be said to exist.

My PhD research with the Open University is concerned with how people engage with these historical representations in popular culture, and how audiences’ and players’ understanding of the past are shaped by them. What opportunities for learning do the different forms (TV, film, videogame) offer? How is this related to how the form structures the content?  What specific media forms or products are considered to be the ‘best’ for learning about antiquity, the most entertaining, or more authentic? This is not to say that that this is merely research into the historical accuracy of a form or product, but the audience-player perceptions of it. For example, videogames have received much criticism over the last couple of years because of how women are represented. In a historical videogame, do the players believe that the representations of women align with the history? (“That’s how women were treated at the time….”) Or are they aware, as Hardwick and Stray note, that representations of Classical content in modern culture shed more light on the receiving society than on the ancient context?

The research as a whole will start answering some of these questions, through beginning with a Pilot Study that investigates audience and player perceptions of their learning through different forms and products; the viewer/player practices while engaging with these media forms (“Do you watch/play alone, or with people?”, “Do you post to blogs or social media in response to the content?”); and the longer lasting effects of engaging with such media (“Has a TV show/film/game ever inspired you to research the history of it more?”). This will allow the narrowing and focussing of a research area that has the potential to be gigantic.

Although at this point I have ensured that the questions in the survey (mostly in a mercenary attempt to increase response rate) relate to ‘general history’ as opposed to antiquity specifically, I am very keen to receive responses from Classicists in order to begin answering some of these questions, both because your perceptions of these media forms and products will be extremely interesting, as well as the fact the research as a whole will ultimately be looking at representations of antiquity in popular culture.

I hope that you could spare 10 minutes or less to aid me in this research and do this brief questionnaire, and if it might be something that a friend or colleague would be interested in, pass it on to them too. I’m also more than happy to talk to any one of you about the research and any suggestions you might have about its nature or direction so please contact me on twitter or at sian.beavers@open.ac.uk.

I look forward to hearing from you!