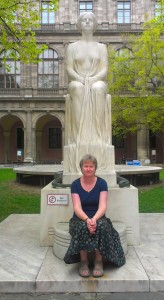 ‘So you must be really good at exams, yes?’ That’s what everyone assumes when you get an academic job. Well, yes – and no. I recently tweeted my personal three rules of exam success, which go as follows:

A former student commented, ‘seriously I still find myself quoting this mantra. I remember in the Anc Med exam looking round & seeing people muttering this.’ But I can go further. I’ve picked up some techniques along the way and I’ll share some of those here. They worked for me, and maybe they’ll help you too.

1. Breathe. Don’t panic. I used to do my panicking a few weeks before the exam, so by the time I was sitting in that hideous gym or hall I was past all that. But even so the first five minutes were hideous, as those around me turned over the question paper and immediately started to write. Do you know what? These people are writing complete rubbish. They haven’t read the questions; they’ve just spotted a word and gone into overdrive. Don’t follow their example. Sit back. Read the questions. Circle or underline some words. If the questions aren’t what you hoped for, never mind – there will be something you can answer, and possibly you’ll produce a better argument simply because you are thinking rather than regurgitating. Look at the person next to you – wow, on to their second page now! – and feel sorry for them because they aren’t answering the question. After five minutes of thinking and breathing, start to write your plan.

2. Read the question carefully. Questions aren’t written to catch you out, but to help you think about the course material. No question will ever be ‘Tell me everything you know about…’ but some answers will be to that question, rather than to the one being asked. The more obvious questions aren’t always the ones to answer, because your words of wisdom are going to be compared with some very good answers as well as some rather iffy answers. But nor do you want to be the only one answering the question – an examiner is unlikely to give you a top mark without seeing from looking over the field that you really are the front runner. Ideally, you want to be one of a group of answers in which it’s clear that yours is the best. That may mean picking the question carefully. And, unless you read it, and think about it, and make a list of the main points to cover and the examples you could use in answering it, you’re not going to get that right.

3. Passing exams isn’t entirely about what you know, but how you present it. There’s a lot to be said for that boring old structure of an intro saying what you’re going to say, three or four paragraphs each focused on one example which contributes to answering the question, and then a conclusion which pulls the examples together to make that answer very clear. So that rough plan you wrote in the five minutes while those around you failed to address the question must address the key words in that question. By all means, leave some lines blank, then write the essay and go back to do your intro. But in many situations you can do the intro first, on the lines of ‘in order to answer this question I am going to do the following/examine these cases’.

4. Give the examiner something a little different. At university I made a conscious effort to include in each exam script at least one point from a course other than the one being examined. I reckoned this would liven things up for an examiner faced with their fifteenth – or fiftieth – answer to that question. It also showed I could make connections between subjects, and that has to be good. Avoid too much creativity here – a friend at university made up a whole tribe for an Anthropology exam – but a confident and accurate mention of something that wasn’t part of the syllabus looks good. If you have a really bad exam, don’t write a letter to the examiner apologising for your poor performance (yes, I’ve seen those). And don’t take a banknote out of your pocket and reproduce it on the answer book (yes, I’ve seen that, but only the once). There’s ‘different’, and there’s ‘no’.

5. Leave 10 minutes at the end to read through your answers. In exam conditions it’s very easy to write ‘Romans’ when you mean ‘Greeks’ or to miss out the word ‘not’. Reading through will also give you a chance to make your handwriting a bit clearer if you’ve been in a hurry. If you can’t read your own writing, the examiner hasn’t a chance.

6. Go home. There’s little point hanging around as people share what they wrote for each question. Thinking ‘Oh no, I totally misunderstood that one!’ or ‘Why did I forget that brilliant example?’ will only depress you. Onwards to the next exam, after a well-earned sleep!

Editor’s note: You can find Helen King on Twitter @fluff35

5 thoughts on “Exam tips: confessions of a professor”