At the Graves of Keats and Shelley, Rome 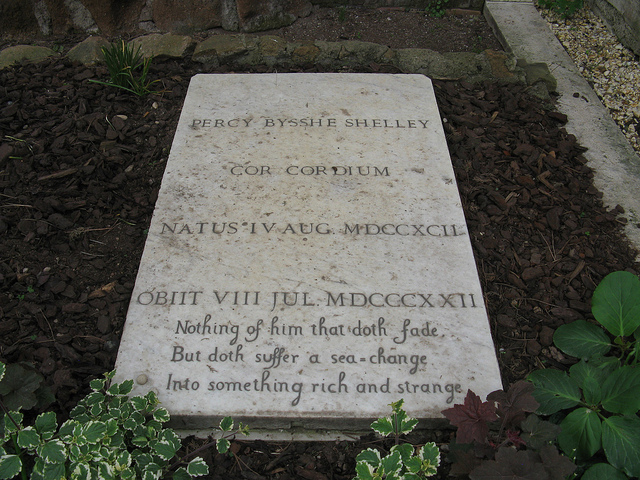 Easily one of the greatest pleasures of literary tourism is the excuse it provides for travelling all over.  In my last post I described my little adventure to the grave of Thomas Gray. Today I am going further afield, fast-forwarding some fifty years on from Gray’s funeral, to visit two of the most famous graves in literary history.

For the English literary tourist, the map of Rome is skewed out towards its margins – towards the cat-haunted cemetery situated beyond the city walls of Catholic Rome, where throughout the nineteenth century non-Catholics were buried at night to avoid offending native sensibilities. There, after a complicated bus-ride, near the squat Pyramid of Cestius, you can find the tomb of Keats, side-by-side with his devoted friend who nursed him on his death-bed, Joseph Severn. A little way away, there’s the grave of Shelley, also side-by-side with the friend who assisted at his funeral, Edward Trelawney. This makes it sound as though they are contiguous; actually, despite little signs and despite the flowers often laid there, it is not especially easy to find either grave, and they certainly don’t seem located in any relation to one to the other.

Though their graves seem to have been tossed as far as is possible from the centre of the city, Keats and Shelley are not entirely banished outside the walls of Rome. By the side of the Piazza di Spagna, in what was the foreigners’ quarter, next to the famous steps on which Charles Dickens found crowds of artists’ models and where nowadays flocks of teenagers giggle and ogle one another, you will find the Keats-Shelley Museum. This set of rooms, reached by climbing up a narrow distempered staircase, is where Keats breathed his last painful breaths, and is one of the very few literary museums in the world devoted exclusively to the place where a writer died. Owing to a long-standing affinity between the poets as young English contemporaries, and the desire of both English and American ex-patriates to celebrate Anglophone culture in Rome, the museum also commemorates the death of Shelley, whose equally untimely death and burial, also in Rome, made him into the spiritual room-mate of his brother-poet.

The unusual interest in the deaths of Keats and Shelley is indicated by the sheer number of nineteenth-century writings concerned with their graves. There are more nineteenth-century poems commenting on the graves of Keats and Shelley than on the graves of all other poets combined. Their graves became metaphors for romantic alienation, sites that dramatised the fate of the poetic imagination blighted and forced into exile by public indifference, and yet freed into the classically pagan Italian ether. As Emma Blyton’s tribute poem ‘To the Memory of Keats’, contained in her Poetical Tributes to the Memories of British Bards (1858) reveals, the graves prompted literary tourists into poetic forms of compensatory memorialisation. Blyton questions why ‘no proud, eulogious pyramid/ Graces the spot where thy young corse is hid’, before shedding ‘The tear of sympathy’ over ‘that fragrant mound’. Here, erasure and exile are at once celebrated and reinscribed as the condition of the romantic poet; yet they are also atoned for, mitigated, and empathised with. This impulse drove the installation of a supplementary wall-plaque later in the century, naming Keats (otherwise famously unnamed on the grave stone).

The tendency to pair the poets in their youthful deaths and poetic frustrations occasionally resulted in inaccurate descriptions of the graves paired within an imaginary literary landscape. William Howitt’s 1847 essay on Keats, which carries in the ‘illustrations’ list the title ‘The Tombs of Keats and Shelley at Rome’, nicely exemplifies the sentimental Victorian misconception that the graves lay side by side. As I’ve already remarked, Keats’s grave in fact lies beside that of his friend Joseph Severn, and Shelley lies beside his friend Trelawney. While literally inaccurate, this pairing of the graves of Keats and Shelley is imaginatively true. From the very beginning, the poets’ graves, both as sites and as sights, were determined by Shelley’s elegy on Keats, presented in his poem Adonais (1821). Published the year after Keats’ death in July 1821, the poem sees Shelley express his longing to be physically reunited with his fellow poet: he implores, ‘Tis Adonais calls! Oh, hasten thither/ No more let Life divide what Death can join together’. The landscape pictured by Howitt is a version of that already imagined by Shelley in Adonais.