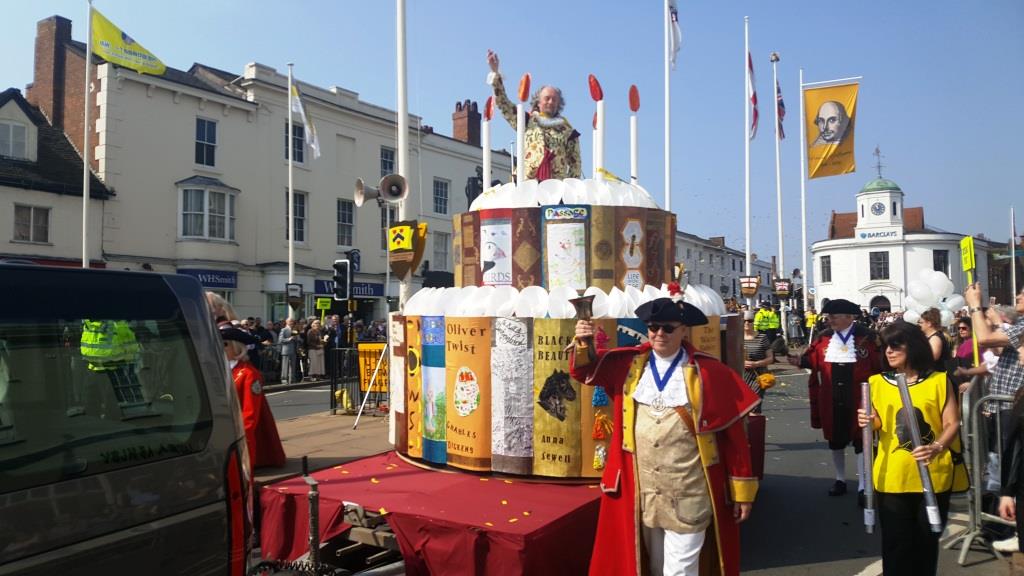 So here I am again in Stratford-upon-Avon, togged up in my increasingly disreputable DPhil gown from Oxford (this year the blue facings seem not only to have faded to a definite mauve, but to have become weirdly blotchy), carrying a vast bunch of rather classy tulips from my allotment, and with a sprig of rosemary pinned to my lapel, setting off in the Shakespeare Birthday Procession. We will start off from some sort of mustering of an assortment of local schoolchildren, council dignitaries, foreign ambassadors, famous actors, distinguished academics, a couple of military bands, and some charitable and literary organizations. We’ll process through crowd-lined streets (thank goodness the sun is shining this time), fetch up if nothing goes wrong (it sometimes does) at a flag-staff, twitch a cord to release the flag, listen to assorted speeches, possibly accompanied by Shakespeare popping out of a cardboard Birthday Cake, admire the Head Boy’s sang-froid as he processes by carrying ‘The Quill’, and so make our way to Holy Trinity Church where we will engage in pleasantries with the Vicar and lay our flowers on Shakespeare’s tomb, before departing (by river I think this time) for a long and bibulous lunch punctuated with long speeches. Tomorrow there will be the Shakespeare service, and by then Shakespeare will have his feather-quill back in his fingers. I suppose I must have been doing this on and off for twenty years. It is all very, very English, and it’s been going on one way or another since the end of the eighteenth century when in 1769, the greatest Shakespearean actor of the day, David Garrick, staged the first major public celebration of Shakespeare’s two hundredth birthday. This was the Shakespeare Jubilee, held five years and five months late (punctuality clearly not Garrick’s strong suit), at Stratford-upon-Avon. Garrick’s initial intention had been to celebrate the Jubilee in London, as would seem more appropriate given Shakespeare’s career as a metropolitan playwright. His choice of Stratford had in part been forced, but was rendered possible and exploitable by the fact that Shakespeare had conveniently managed to be born in the same place in which he had died (good old Shakespeare – ever the people pleaser).

This widening of celebratory focus from death to birth, and thus from grave to cradle seems at first glance to be simple, helped on by our contemporary habit of celebrating birthdays. I saw it a version of it in action at the Burns mausoleum, decorated with flowers for Burns’ birthday, a celebration that started up around the same time. But it’s a complicated transaction, both in emotional and practical terms. The poet’s grave was already the sort of site upon which memorial was conventional, and which provided physical evidence of the author’s bodily existence outside of the text. But making a birthplace into a memorial of the author’s physical existence requires something else Although both grave and cradle may be said to speak of ‘origins’, these are clearly different types of origin. The grave speaks of textual origin simply as the site of the body that existed beyond the composition, dissemination and reading of the text. The cradle, by contrast, speaks of the origin of the body itself, in fact, of the incarnation of ‘genius’.

Surprisingly, considering that as surely as a writer dies, he or she has been born, this shift or extension of emotional investment from grave to birthplace only holds for comparatively few authors. Again, it appears at first that this is principally a matter of practicalities: graves may be dedicated to the dead for eternity, while ‘birthplaces’ are actually houses, and even if they do not physically disappear, as did Milton’s birthplace in Bread Street, engulfed by the Great Fire of London, they are too expensive not to be adapted and updated for re-use. Still, for some writers birthplaces are especially important.

The birthplaces of Shakespeare and Burns are absolutely central to the nineteenth-century popular understanding of these writers. Both houses celebrate the writers’ humble origins, at the same time as firmly positioning their youths within national rural landscapes. Shakespeare’s Stratford may be said to set up a model of ‘text-less tourism’. What on earth do I mean by this, I hear you ask? I mean a form of tourism that aspires to being a text-free experience: indeed, to being an experience that pre-empts the necessity for texts. In this sense Shakespeare’s birthplace and grave as tourist attractions might be conceived of as a pair of book-ends, both organising the experience of the reader and yet ‘outside’ the book.